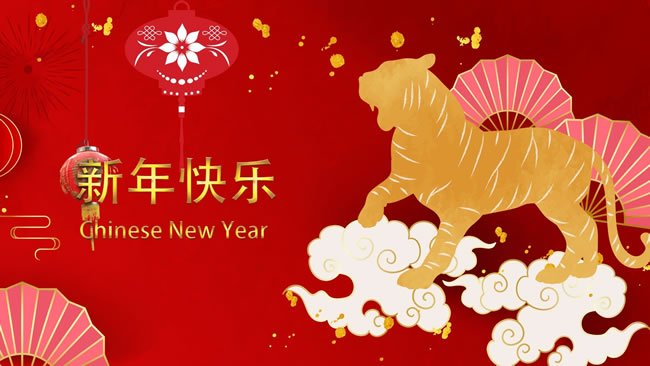 As you may know, the Chinese New Year is the most important festival for Chinese people. It is celebrated not only across China, but also in countries and regions where there are Chinese communities and influence such as the Philippines, Vietnam, Malaysia, Indonesia, Cambodia, Thailand, and Singapore. In this blog, let me tell you some facts about the Chinese New Year.

In 2022 the Chinese New Year falls on February 1st, and you might have already noticed the festive vibe around. There are some interesting facts you may like to know about this festival, along with the culture, celebration, and symbolism around it.

The exact date of the Chinese New Year is different every year as it follows the lunar calendar. However, it usually starts between late January and early February. The first day of the celebration marks the first day of the first lunar month. You may already know that it’s the most important festival in China, but what you may not know is that it’s also the longest festival in China, lasting 16 days. It starts on New Year’s Eve (one day before the festival) and lasts till the 15th day of the lunar month. The corresponding public holiday usually lasts from the eve of Chinese New Year till the 9th day of that lunar month.

There are 12 animals in the Chinese Zodiac (rotating every 12 years), which are the Rat, the Ox, the Tiger, the Rabbit, the Dragon, the Snake, the Horse, the Sheep, the Monkey, the Rooster, the Dog, and the Pig. It is believed that people born in a particular year of the zodiac have certain characteristics of the corresponding animal. This year, 2022, is the Year of the Tiger, and those that were born in 2010, 1998, 1986, 1974, 1962 and so on are also ‘tigers’. So why not find out what your Zodiac animal is?

Many foreigners who study or live in China find the Chinese New Year surprisingly quiet and different from usual times. Shops, restaurants, and markets are closed, government entities are off work, and business is slower as it is the time for families to reunite. Many people who work in the cities travel across the country to their hometowns before the holiday to be with their families. Major cities such as Beijing, Shanghai, and Guangzhou are usually empty during the festival. Everything starts to get back to normal on the 9th day of the lunar month when the public holiday ends.

The Last Day of the Festival

The 15th day of the Lunar January marks the first full moon of the Lunar year and the last day of the Chinese New Year festival. On this day there is another festival called the Lantern Festival. During this festival, children take colorful lanterns onto the streets. The traditional food of this festival is small glutinous rice balls filled with nuts or sesame paste, called ‘Tangyuan’ (汤圆) or ‘Yuanxiao’ (元宵), which symbolize union.

There are a lot of interesting myths about the Chinese New Year. One is about a monster named ‘Nián (年)’. It is said that thousands of years ago, Nian would always show up and attack villagers on a particular day each year. When this day came, the villagers were unsure whether they would be able to survive ‘Nian’, so they’d shut their doors, gather the whole family, prepare a nice dinner, pray to their ancestors, and stay up all night long in the hope of hiding away from ‘Nian’ for another year.

Another interesting myth is about the monster named ‘Xi (夕)’, said to be large and have a fierce temper. During wintertime, it would wander around villages and hunt for food, the villagers would flee before the day that Xi started hunting. The villagers later figured out that Xi was afraid of lights, loud noise, and the color red. So they would decorate their houses by sticking red strips to them, and set off firecrackers that made loud noises to scare off the monster and welcome the new day. This day is named as ‘Chu Xi (除夕)’ where ‘Chu (除)’ means getting rid of something and ‘Xi (夕)’ as the monster. ‘Chu Xi (除夕)’ is now the Chinese New Year’s Eve, an equally important day to the Chinese New Year festival itself. 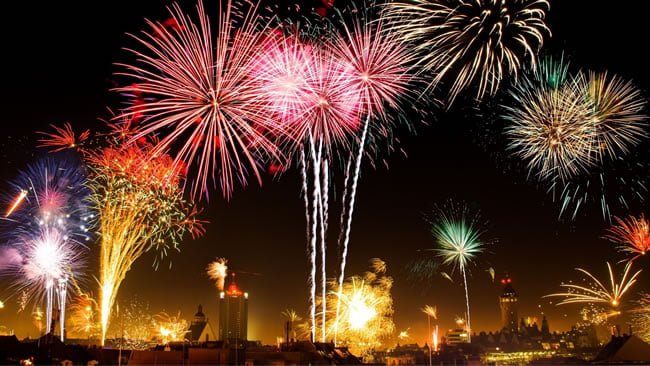 These myths have a certain influence on the rituals and celebrations of the Chinese New Year. The festival is always a symbol of family reunion, so no matter how far apart they are, family members will always try their best to travel and reunite during the Chinese New Year. The highlight of the celebration includes firecrackers, dragon dances, and lion dances. It is believed that the louder the firecrackers, the better luck the coming year will bring, and that the dragon dance and lion dance will scare off evil spirits.

Moreover, it’s a tradition for the elderly to give youngsters red packets containing cash during the New Year and the amount in the packets should always be an even number.

Red is considered an auspicious color during festivities. It is common to see streets, shops, and restaurants decorated with red lanterns and red paper cuttings (cut in the shape of Chinese characters or patterns and glued to the windows). It is also common to see the Chinese character ‘Fu 福’ (meaning happiness/fortune), upside down (倒). In Chinese, the upside down “Fu” sounds close to ‘arrival’ (到); so putting the ‘Fu 福’ upside down means the hope of Fu’s (happiness) arrival. In South China, it is also common to display mandarin or kumquat plants inside or outside of houses, symbolizing wishes for wealth and good luck.

Along with red decorations, people also tend to wear red outfits during the Chinese New Year. Putting red couplets (对联) on both sides of doors is a related tradition that people practice on New Year’s Eve. These New Year Couplets are usually red, with Chinese calligraphy inscribed upon them in black or gold ink, and they always come in pairs. The writings on the couplets are usually auspicious well-wishes. Another common tradition is to wear new clothes and shoes for the New Year.

Certain things are considered taboo or bad luck during the Chinese New Year. People usually don’t have their hair cut (especially during the New Year) until the second day of the second Lunar month. It’s also considered bad luck to sweep the house, as doing so will sweep away the good luck and fortune. 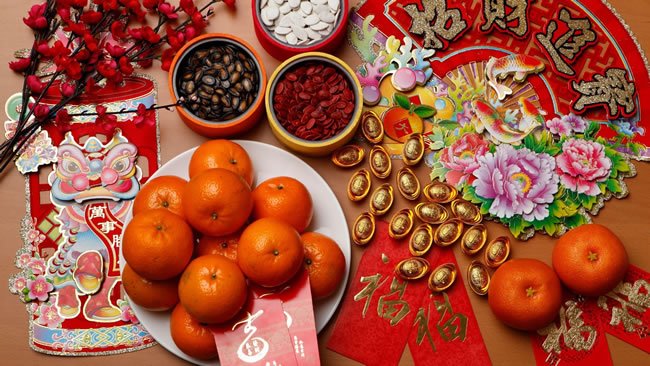 A celebration is never complete without the presence of good food. In the Chinese New Year’s context, it’s fair to say that it’s a feast. The New Year’s Eve meal is considered the most important part of the celebration. Most of the prepared dishes have names representing some form of positive wishes. For instance, a common dish on a Chinese New Year dinner table is steamed fish. There’s a saying called ‘Nian Nian You Yu (年年有余)’, that means abundance year after year. The word ‘Abundance’ is ‘Yu(余)’ which is pronounced the same as fish in Chinese. In northern China, people will usually make dumplings as well. Another dish is ‘Niangao (年糕)’ – a pastry made of glutinous rice flour and sugar.

Nowadays, the Chinese New Year has become a global festival and celebration that everyone can enjoy. There are interesting parades, events, lion dances, and fireworks displays going on, so make sure you check them out and don’t miss the food offerings!