For anyone looking to do business in Africa, below are some essential facts to be aware of.

The Approximate Number of Languages and Speakers 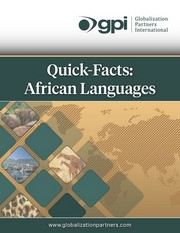