Greek is spoken by over 12 million people worldwide, the vast majority of whom live in Greece, where Greek is the official language. In Cyprus, Greek is a co-official language along with Turkish. Small groups of fluent speakers can also be found in Albania, Egypt and Italy.

Among the Indo-European languages, Greek is unparalleled in its long, storied history going back more than 3,400 years. Modern Greek, which began to emerge around the 15th Century, is still relatively young within this long history.

Greek was divided into a de facto official spoken language called Demotic. It is based on the Peloponnesian dialect and is understood by much of the Greek population. The official written/administrative language is called Katharevusa, which had been developed in the 19th Century following the establishment of the new Greek state and attempted to return the Greek language to its classical roots. In 1976, the Greek government declared Demotic the official spoken and written language, renaming it Standard Modern Greek. 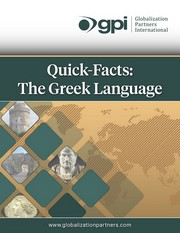