Tagalog is an official language in the Philippines and is the mother tongue of approximately 25% of the population of the Philippines. More than half of all Filipinos speak Tagalog as either a first or second language.

Tagalog is part of the Austronesian language family and is known for its complex verbal system. Tagalog has been greatly influenced by several other languages including Spanish, Chinese, English and Arabic.

Tagalog was chosen as the national language in 1937 and was made an official language when the Philippines regained independence from the United States in 1946. Since then, Tagalog has been mandatory in schools and has become the language of choice for literature, radio, television and government functions. 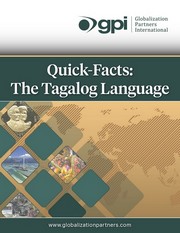