The African continent has 725 million inhabitants. The African people speak more than 2,000 languages, which represent over 30% of the world’s languages. Africa is linguistically diverse with almost one language per 360,000 inhabitants.

Although there are over 2,000 languages ​​in 56 states, only 14 African languages have an official status. 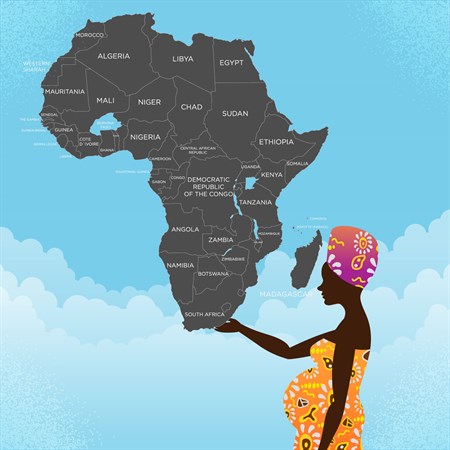 The majority of countries have retained the official language of the colonizer. Very few of the continent’s indigenous languages have an official status.

There are 353 languages in this family, totaling 340 million speakers. However, the Afro-Asiatic languages are not exclusively African. This language family also extends to the Arabian Peninsula and covers only the northern part of West Africa.

Berbere, the original language of the inhabitants of North Africa, is part of this language group as well as Arabic, which is the language with the most speakers in Africa.

The Nilo-Saharan family consists of 197 languages with 35 million speakers. These languages cover some of the upper part of the Nile basin and highlands in East Africa.

There are twelve groups of languages that compose this language family. But, only two are located in West Africa: the Songhai (Mali, Niger, Burkina, and Benin) and Kanuri (Niger, Nigeria, Cameroon and Chad).

These languages are located in Namibia and extend to Angola, Botswana and South Africa. Historically, the Khoisan languages were spoken in southern and eastern Africa. They were slowly replaced by many of the Bantu languages and then European languages. 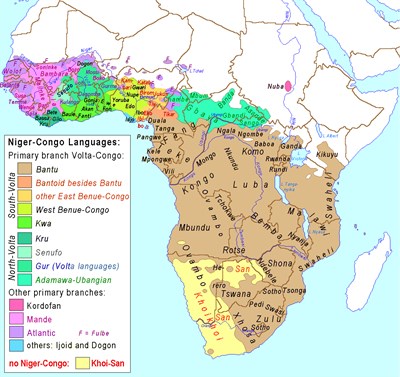 The Niger-Congo family has nearly 1500 languages, making it the largest language family in the world. It makes up 71% of African languages and 22% of the world’s languages.

It covers most of the West African countries and the vast majority of the population of the region. The Bantu languages are in this family, which cover almost all of sub-equatorial Africa. Kiswhalili (aka Swahili) also belongs to this language group.

Many experts believe that the original home of the Bantu languages is located south of the Benue (along the Cameroon and Nigeria border). 4000 years ago, the Bantus began a long relocation to Central Africa, driven by the aridity of the climate and the development of agriculture.

The many similarities between the Bantu languages ​​and their remarkable geographic expansion in a specific language area are often distinguished from the rest of the Niger-Congo family.

Africa is an extremely diverse continent. Anyone looking to travel or expand their global business there should fully research the specific country or region they are interested in to understand the languages and cultures that exist.

This vast continent presents many opportunities for African companies, as well as global companies looking to expand into the African marketplace.

END_OF_DOCUMENT_TOKEN_TO_BE_REPLACED

Mai Farouk Mohamed Nour (Mai Nour) is a native Arabic speaker who lives in Cairo, Egypt. She is a senior copywriter, translator and reviewer with a great passion for translation and creative writing in English and Arabic. Mai obtained her B.A. degree in English Language and Literature from the Faculty of Alsun, Ain Shams University. She has a well-rounded experience exceeding nine years in copywriting and translation working with various companies throughout the Middle East. Her primary translation and writing focus has been on the subjects of legal, technical, hospitality, localization and general marketing, and has significant experience translating legal and marketing projects and HR and literary books. For her, translation is more than a career, it is a mission. When Mai is not working she enjoys traveling, reading, coloring, and going to the movies.
See All Posts by Mai Nour Click to Contact Mai