What comes to mind when you hear the word ‘Latvia’? Some people wonder, is it a city in Germany or Sweden? Other people say, “oh, yes, I have been there, Vilnius is your capital, right?” No, Vilnius is the capital of Lithuania. Many people aren’t familiar with the small country of Latvia. Latvia is located on the Baltic Sea between Lithuania and Estonia, with a population of roughly two million people.

This unique country possesses its own exquisite beauty. Riga, the heart of Latvia, is called “a little Paris” because of the Old Riga district famous for its art nouveau architecture, medieval buildings and numerous shops and cafes welcoming visitors. 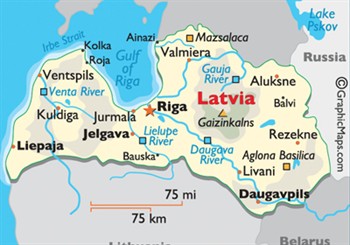 According to the statistical data gathered by the Central Statistical Bureau, Latvia is home to people with more than 160 nationalities. Currently there are slightly less than two million residents, and the main ethnic groups are Latvians (61.6%), Russians (25.8%), Belarusians (3.4%), Ukrainians (2.3%), and Poles (2.1%).

In 2011, the Central Statistical Bureau performed a calculation of the people speaking their respective languages at home with their family members and friends. It showed that the most popular language was Latvian, as expected, spoken by 62.1% residents. It was followed by Russian which is spoken by 37.2% of residents. All other languages were almost non-existent.

However, if you look at the districts in Latvia the data gets fascinating. Latvian is spoken by 91.2% of residents in Vidzeme, 79.7% in Kurzeme, and 76% in Zemgale. But, in Latgale and Riga people mostly speak Russian, 60.3% and 55.8%, respectively.

Latvia is a small, eastern European country with a strong national identity and diverse culture. Latvian is widely spoken by most of the population, however, in some of the districts, like Riga and Latgale, Russian is also spoken.