If you are planning to do business in Japan, if you want to be successful in targeting the Japanese marketplace, it is important to understand the needs of your target customers, the consumer behaviors, the language and the key insights about the market.

This blog post released by Globalization Partners International contains the information for the Japanese market on Website Globalization and e-Business along with accompanying infographic, which covers a wide range of topics from language facts to website translation tips for Japan. All this information would help you enter the Japanese market more effectively and efficiently. 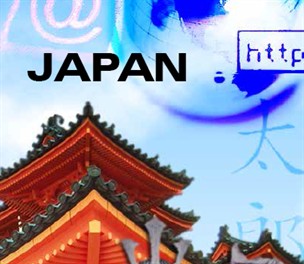 Facts about the Japanese Market

The Japanese culture is a multi-layered and complex system that has been developing within itself and forming new layers for thousands of years. Japan has a fascinating and multifaceted culture; on the one hand it is steeped in the deepest of traditions dating back thousands of years; on the other it is a society in a continual state of rapid flux, with continually shifting fads and fashions and technological development that constantly pushes back the boundaries of the possible.

If you attempt to launch e-business in Japan, in order to effectively target the Japanese online market, it is crucial to understand search engine optimization in Japan and the top search engines to focus on the Japanese consumer.

With the growth of global communications and marketing, you need to adapt your social media communication to different cultural audiences and locales. The report provides the key insights and top social networks for Japanese consumers.

Key insights from the digital landscape for Japan:

Culture and Online Shopping in Japan

The following infographic provides several useful facts and insights about Japan. The infographic contains a handy graphical sampling of what’s inside the report.

Our updated research report for the Japanese market on Website Globalization and e-Business along with accompanying infographic covers a range of topics from language facts to website translation tips for Japan. 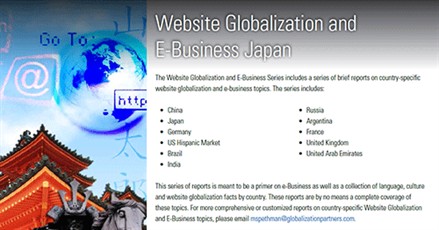 The Japan country research report is 14+ pages and provides useful information and statistics about the country and local consumers and market. The newly updated report for 2014 is available in PDF format and is free to download at: Website Globalization and E-Business Series.

Looking to sell your goods or services in Japan

If you are looking to expand into the Japanese market and have a website localization project in the works, this report is for you. First published in 2008 and newly updated for 2010, 2012, and 2014, the report contains tips and information on e-business, website translation and web consumers in Japan. The report also has a nice link library with useful sites and resources for those wanting to do business in Japan.