If you are planning to do online business in India, if you want to be successful in targeting the Indian marketplace, it is important to understand the needs of your target customers, the consumer behaviors, the Indian traditions, the languages and the key insights about the market.

This blog post released by Globalization Partners International contains the information for the Indian market on culture and e-business along with accompanying infographic, which covers a wide range of topics from country facts to online business tips for India. 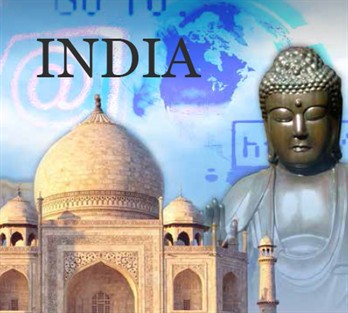 Facts about the Indian Market

India is a federal union of states comprising twenty-eight states and seven union territories. And its capital is New Delhi.

India is a traditional society full of symbols, rituals, traditional values and contextual elements. At a macro-level, Indian culture can be described using five cultural values based on the work of Hofstede.

If you are considering any digital marketing (SEO) campaigns, it is important to understand search engine optimization in India and the top search engines to focus on while targeting the Indian consumer.

Key Insights from the Digital Landscape for India:

The following infographic provides several useful facts and insights about India. The infographic contains a handy graphical sampling of what’s inside the report.

Our updated research report for the Indian market on Website Globalization and e-Business along with accompanying infographic covers a range of topics from language facts to website translation tips for India.

The India country research report is 14+ pages and provides useful information and statistics about the country and local consumers and market. The newly updated report for 2014 is available in PDF format and is free to download at: Website Globalization and E-Business Series. 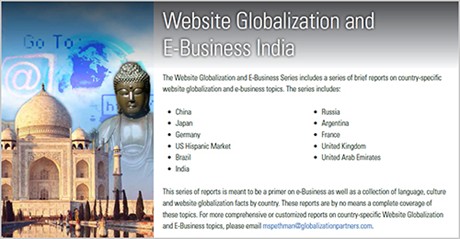 Looking to sell your goods or services in India

If you are looking to expand into the Indian market and have a website localization project in the works, this report is for you. First published in 2008 and newly updated for 2010, 2012, and 2014, the report contains tips and information on e-business, website translation and web consumers in India. The report also has a nice link library with useful sites and resources for those wanting to do business in India.