The word “e-commerce” is usually associated with the markets of Asia, specifically China.  Articles published about international e-commerce tend to focus on the astounding growth of the Chinese market.  But, there is a new player emerging onto the e-commerce playing field, Latin America.  Rarely is Latin America mentioned as an area for opportunity.  However, this may be the ideal time to look into the possibilities this young entrant into the e-commerce market has to offer. 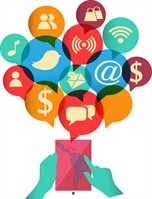 The growth of e-commerce in Latin America is closely linked to m-commerce (mobile commerce). The region has a large population accessing the internet via their mobile devices.  These customers are beginning to recognize online purchases as a safe alternative to carrying large amounts of cash, due to security issues in a number of areas in Latin America.

This shift in Latin America’s buying habits, has resulted in a growing trend of using mobile devices to make purchases. In 2012, Ericcson produced a report on the growth of m-commerce in Latin America.  Their research found that 74% of people not using m-commerce in 2012 would like to begin using at least one m-commerce service on their phone.  Latin America’s market for m-commerce and e-commerce may be in the early stages of adopting its use, but the region is ready to begin fully embracing it.

Below is a table from eMarketer forecasting the percentage of online buyers through 2016 in the key markets in Latin America.

Online purchasers already make up a significant portion of the population in the Latin American market and will continue to trend upward. However, there is still an opportunity to address this market while the adoption of m-commerce and e-commerce is in its early stages.

ATKearney produced a report in 2012 on international e-commerce growth and was very positive about the prospects in Latin America. Mexico was mentioned as a market that has a low level of internet access penetration, but is growing steadily. It is currently the second largest e-commerce market, in terms of dollars spent, due to the country’s wealthy residents utilizing e-commerce. In 2012, Mexico spent $1.2 billion USD via e-commerce. With projections of internet access reaching much of the population by 2016, they predict e-commerce sales will reach $4.4 billion USD by the end of 2016.

The World Bank’s website identifies the following information regarding Latin America & the Caribbean:

Brazil is the emerging leader in the Latin American market. This table, from eMarketer, displays the percentage of m-commerce among all of the e-commerce being conducted in Brazil from 2010 to 2013.  It grows from 0% to almost 5% by the end of 2013. In 2013 alone, the percentage has nearly doubled. A different report from Ystats suggests that in 2013 it not only doubled, but tripled. The adoption of m-commerce in Brazil is beginning. The other markets of Latin America will not be far behind. 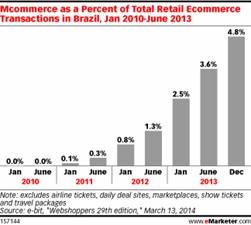 In May 2014, eBay made a strong commitment to enter Latin America by providing localized sites that support 18 markets across Latin America. This made waves as eBay, a key international e-commerce player, was putting focus on a market that was previously left to the local players such as MercadoLibre (of which EBay is an investor).

eBay realized in order to be a player in this market they needed to localize their website/apps to appeal to the consumers. They had a small presence in Latin America before 2014, but decided to fully commit to the market with localized websites and localized applications. Wendy Jones, Vice President of Global Expansion and Cross Border Trade for eBay, has been quoted in multiple articles and press releases stating that Latin America is one of the fastest growing e-commerce markets in the world.

While it is one thing to enter a market, it is another to compete successfully.  As eBay has learned, and understands, a company should adapt to the marketplace and provide a way to do business with the consumer in their language.

Website translation and localization is just one crucial piece of an overall business plan to take your business global. An additional step that many companies, large and small, often overlook is global SEO. This requires a localization vendor that understands the search habits in other markets. A misstep in your localization and global SEO efforts can be the difference between being a major e-commerce player in a growing marketplace and allowing the competition to take the lead.  While many companies have not yet focused on Latin America, now may be the right time to consider it, if they want to gain a share of this sizeable, but relatively untapped, market.