I recently reviewed a few global brand reports and was surprised by some of the findings.  I was happy to learn that the report details went beyond the obvious high regard for products from brands such as Apple and Coca Cola.

I have highlighted some of the information I found most interesting in the below sections.

In FutureBrand’s Made In report, the focus was not on the brands themselves. Instead, the emphasis was placed on the countries that produce the strongest brands and highest quality for product categories.

The top ten Country of Origin strength rankings, per the report:

This country listing has a strong correlation to the languages we see from clients for website, eCommerce, software, and documentation localization and for multilingual SEO.  However, certainly not in this order, as China rules the demand for localization with most leading translation companies.

But moving beyond the general country reputation, when looking at certain leading product categories it gets interesting.

A clear number one spot was Switzerland in the Luxury category.  France and Italy rank as number one and two, respectively, for the Food and Beverage category. This was no surprise as these countries export a lot of wine and champagne, and are known for good food.  But the UK being number seven in Food and Beverage came as a surprise to me. I thought they would have been a bit lower given the general reputation for food in the UK.

Another surprise was the fashion industry statistics. Surely Italy or France would be number one, right? No, the USA was listed in first place. Italy and France came in at second and third, respectively.

This report provides a great deal of additional analysis and clarification for how the countries listed built their reputations. But it is interesting to consider a country’s reputation for branding separately from the individual brands. Together they certainly can effect one another. 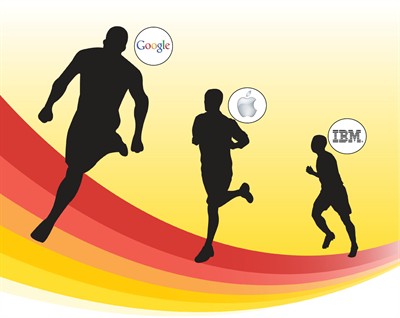 BrandZ updated their list of the top 100 Global Brands. The first thing I saw was that Google is listed in front of Apple.  Apple, on its way to possibly being the first company with a trillion dollar valuation, dropped their brand value 20% from 2013 and Google’s increased 40% to take the number one spot. Google has not held the top spot in this report since 2010.

I have to say I am a bit surprised to see IBM at number three as it seems to me that I do not hear their name very much in the media or tech circles. Yes, they are a major company, but they are not getting headlines as much as in the past. Their value did drop a bit, but they are still able to rank at number three. They rank one spot ahead of Microsoft.

A company I have never heard of called Zara ranks in at 35, ahead of companies like Exxon-Mobil, L’Oreal, HP, Red Bull, and Twitter. Zara was very close to the same value as Nike.

The report states that only 18 companies lost value this year, but the average has been 30 companies each year since 2006. It was an average of 38 during the recession. So the report of a 12% average growth this year is a good sign of the economic recovery.

Interbrand publishes a brand ranking report which is solely based on the brands’ annual revenue and does not consider other criteria of brand acceptance and perception strength. It is good for a comparison, but misses the real value of a brand.

They list Apple at number one and Google number two. It is not until the 94th spot that a Chinese company appears (Huawei). When only based on revenue, a company with the brand power of a Tencent in the Brandz report will not show its value in the Interbrand revenue based report.

In Sarah Gordon’s Financial Times article, she quotes Elspeth Cheung, head of BrandZ valuation at Millward Brown Optimor as saying, “One of the themes is that these brands are becoming part of our lives.” She adds, “The other big theme is globalisation as western brands are coming back this year.”

Globalization includes many things to a business, including communicating with their global client base. We have seen an increase in marketing efforts from clients over the past year for website localization and multilingual SEO to help them be found by potential customers looking for products and services they offer. Some companies are still using basic, immature processes to reach these customers, but many are investing in a more sophisticated process beyond basic translation to make their SEO/SEM efforts more successful. As they do this they just may find that they are increasing their global brand ranking for 2015.