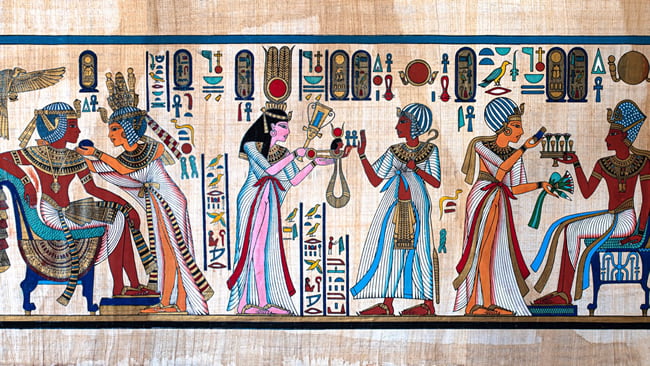 The Pharaonic civilization is one of the oldest and greatest civilizations in the world, which is characterized by vast manifestations of art and ingenuity that dazzled the entire world throughout history. To this day, scientists fail to discover many secrets and wonders despite the advancement in equipment and technology they use. For example, many scientists believe that those who built the pyramids were in fact aliens, because of the architectural and engineering wonders that exceeds the limited possibilities of that period, and this indicates the ingenuity of the Pharaohs. The pyramids, one of the Seven Wonders of the World, were built in the era of the Fourth Dynasty, and were designed as tombs for the pharaohs of this dynasty. Past forward to our modern world, the Pharaohs’ Golden Parade is an event unlike any other.

The mastery of the pharaohs in the art of sculpture is demonstrated through the statues and carvings on the walls and coffins. Most of the stone paintings, the bases of the statues, and the altars were decorated with prominent or engraved carvings. The carving of the inscribed scenes required extreme accuracy implemented in two stages. The first stage was transferring the drawings from papyrus rolls to the walls and ceilings with pen and ink. Then sculptors carved those drawings using chisels. These paintings showed a remarkable development, which is the ancient artists’ coloring of these inscriptions.

In ancient Egypt, the people believed in resurrection and immortality after death. In this scenario, the soul would return to the body once again, and then the person would live a life of immortality. Therefore, ancient Egyptians took extreme care in preserving the body so that it could safely cross back to life again. They also kept most of the deceased person’s belongings with the corpse in the tomb, along with food and drink.

One of the most famous legacies of ancient Egyptians is the science of embalming, which is the preservation of the deceased body. It begins with extracting the brain from the nose and the internal organs from an opening on one side of the body. The mummifier takes out the lungs, stomach, intestines, liver, and kidneys by making an opening on the left side of the abdomen. These organs would then be placed in natron salt, painted with rice oil, wrapped in linen, and put in canopic pots. Later, they would return the heart and kidneys to the body of the deceased, since the heart has a role in the afterlife according to their beliefs. Despite the advancement of the art of mummification, first and second-class embalming practices remained limited for the preservation of kings, princes, and rich folks. As for the commoners, the bodies were not embalmed following these methods because of their high costs, so the Egyptians resorted to inventing a third method of embalming that was cheap and affordable, but it did not preserve the integrity of the corpse for a long time.

In a celebration of the glory of the past, on April 3, 2021, Egypt’s highly anticipated Pharaohs’ Golden Parade took place for the whole world to see. The transfer parade of the royal mummies included 22 Pharaonic royal mummies, 18 of which were mummies of kings and the remaining 4 were mummies of queens, was marked as one of the greatest event of all time. The process of transferring the royal mummies was in accordance with international safety standards for transporting antiquities, as they were placed in specially equipped wagons, adorned with the latest scientific equipment to preserve them.

This procession moved from the Cairo Museum in Tahrir Square, Cairo to the National Museum of Egyptian Civilization in Fustat City in a wonderful festive atmosphere. Twenty-one artillery rounds were fired lighting up Tahrir Square, the obelisk, rams, and surrounding buildings, and enchanting music and patriotic songs were played by the military bands. The mummies moved in order of age on golden-colored pharaonic chariots, equipped with a pneumatic suspension system to absorb vibrations, and bearing the names of their passengers in Arabic, English, and hieroglyphics. The mummies were accompanied by 60 motorcycles, 150 horses, and a Pharaonic orchestra led by the famous Egyptian maestro Nader Abbasi. The mummies paraded around the obelisk in Tahrir Square, then the procession moved along the Nile to the new National Museum of Egyptian Civilization, the location of its new permanent headquarters. This amazing show lasted for 40 minutes in an extremely cheerful atmosphere.

The sound and light cost of this amazing show is estimated to be approximately 60 million pounds. It took about 3 months of elaborate preparations so that it would appear prestigiously before the world.

The Goals of the Pharaohs’ Golden Parade

This enormous historical celebration of the Pharaohs’ Golden Parade was a marketing propaganda for Egypt, targeting the whole world. It aimed to show the world how the Egyptians take tremendous pride in their civilization and ancient history, and to take advantage of the opportunity to increase the world’s awareness and knowledge of the ancient civilization of Egypt. It was expected that it would generate global interests affecting the revitalization of Egyptian tourism. On a political level, Egypt sent the message to the world that it can organize such a huge event ensuring security, stability, and safety.

The Pharaonic civilization will continue to conceal many secrets and endless surprises. Such a civilization fascinates the world to this day and many researchers seek to discover more about its details, sciences, arts and technology.

Egypt’s rich history will remain one of the most fascinating tourist attractions. It’s geographic location make it an ideal destination for business and tourism. Anyone planning or developing an Arabic translation strategy for doing business in Egypt must understand the culture and traditions. Contact Globalization Partners International for any language services requirements.