Are you thinking of doing business in Brazil? Our translation agency, Globalization Partners International, has released the newly updated research report for the Brazil market on Website Globalization and e-Business along with accompanying infographic. The report covers a range of topics from language facts and cultural data to search engine marketing and website translation tips for Brazil. 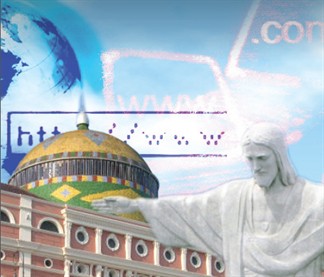 If you wish to be successful in marketing to the Brazilian marketplace there are many factors to consider. This blog post will provide highlights of our recent whitepaper report on understanding the nature of the Brazilian market and cultural values of Brazilian consumers to help you achieve the best results as you enter and do business in Brazil.

Facts about the Brazilian Market

Brazil is a federative republic consisting of 26 states and a federal district called Brasilia, which is the capital.

Brazil has an extremely diverse mix of cultural values, heavily mixed by Portuguese, African and Native American culture. In the last two centuries the culture was also influenced by an influx of German, Italian, Spanish, Japanese and Arab immigration. Language and religion are dominated by Portuguese influences.

Brazil is ranked as high in “Traditional Values” and relatively balanced between “Survival” and “Self-Expression values” according to the cultural map of the world based on the World Values Survey.

If you are considering any digital marketing (SEO) campaigns, it is important to understand search engine optimization in Brazil and the top search engines to focus on while targeting the Brazilian consumer.

Understanding the social media landscape in Brazil is one of the most important components for online strategists looking to leverage these channels to the Brazilian consumer. The report provides the key insights and top social networks for Brazilian consumers.

Key insights from the digital landscape in Brazil:

Culture and Online Shopping in Brazil

The following infographic provides several useful facts and insights about Brazil. The infographic contains a handy graphical sampling of what’s inside the report.

If you are planning to do business in Brazil, it is important to understand the needs of your target customers. You will always need to understand the consumer behavior, the language and the key insights about the market. Our updated research report for the Brazil market on Website Globalization and e-Business along with accompanying infographic covers a range of topics from language facts to website translation tips for Brazil. 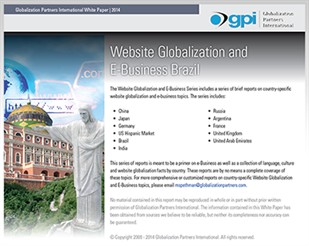 The Brazil country research report is 14+ pages and provides useful information and statistics about the country and local consumers and market. The newly updated report for 2014 is available in PDF format and is free to download at: Website Globalization and E-Business Series.

Looking to sell your goods or services in Brazil

If you are looking to expand into the Brazilian market and have a website localization project in the works, this reports is for you. First published in 2008 and newly updated for 2010, 2012, and 2014, the report contains tips and information on e-business, website translation and web consumers in Brazil. The report also has a nice link library with useful sites and resources for those wanting to do business in Brazil.