Linguistic borders according to Putinism

What would happen to our world if we reduced the number of languages from 7,000 to 9? Imagine how this would affect relationships between people, nations, commerce, education and all institutions.

According to Putinism, the fact that Russian speakers should be protected everywhere opens a great discussion around the world. My favorite magazine The Economist took some time to provide an interesting and detailed analysis of how this argument might work. Boundaries across nations would need to be restructured and as per Mr. Putin’s principles, linguistic borders would be set as per an older colonial world view. 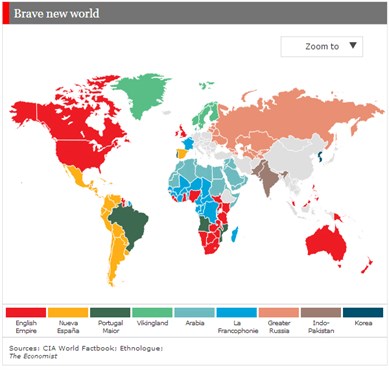 “… Portugal gets to reclaim Brazil, Spain most of the rest of Central and South America and France most of west Africa, which would probably be fine by the locals…”

With the establishment of new rulers, a country’s culture would be strongly affected. If we think of culture and all of its facets, we may find that apart from people, mindset, traditional food and local customs, each culture’s language would be mixed with a new ruler’s language and would even be under threat to disappear or be absorbed by the new mothers’ tongues. “… A mighty Scandinavian kingdom comes into being-including Finland, although Finnish is very different from the Scandinavian tongues. Since Swedish is Finland’s second language, the Vikings would have strong grounds for bringing about the sort of peaceful merger based on shared cultural values for which they are famous.”

And what about the fate of the English language considering that English has become the modern Lingua Franca for international commerce and relationships? And thanks to the phenomenon of globalization, English has turned out to be the primary language for Australia, Canada, New Zealand, United States and Britain of course.

If we analyze the geography of languages in relation to the former colonies that were established all over the world, we would find out that the English speaking countries are the result of a cultural extension from Britain. Through its colonies where speakers that immigrated to the colonies tended to be intermingled themselves with the locals and by contagious diffusion, non English speakers also acquired the basics of the language. Many colonies had adopted the language of the native people as the official language, while others, kept their own native language as a vernacular language and adopted English as their official language to promote their economy and win international business and build foreign relationships with other nations.

The geography of languages could be considered as the science that studies the varieties of tongues although it is intrinsically related to the study of dialects (Dialectology). It studies a specific region or area and through various methodologies (such as direct surveys to the inhabitants), it results in maps so as to show clearly a language’s location and distribution. It is said that if there are no boundaries or frontiers, there would be no dialects, but the geography of languages shows today that this basics of Dialectology is no longer valid. The only real boundary could be a sea. The limits among areas are disappearing if we measure them through language variations as languages are daily being affected by borrowings from other languages and therefore, the “original or pure” language has been reduced to Sanskrit or Latin (this latter still used for Vatican City for example).

It is important to review the fact that the geography of languages is based mainly on geography. However as we understand the earth as the habitat for human beings, and as a consequence all the actions completed by those inhabitants in relation to their social life, cultures and natural environments, we need to examine other non-geographical aspects. Different studies have revealed how nature can shape languages (especially at the phonetics and vocabulary levels) but moreover, it’s amazing to see how different dialects can survive within one geographical area. If we consider that “The world’s 7 billion people speak more than 7,000 languages; in Russia alone there are more than 100”, we can easily understand the importance of helping languages to survive. Cultures need to continue their own development to evolve across years and thanks to the mixture of inhabitants and geographical distribution, new language flavors could be born.

To read the full article, please see: The world according to Putin

As a translation agency, we look at the world in terms of “locales”. We define these locales as a combination or geography, language and culture. We believe you need to address all aspects of a locale to communicate in a manner that will be received in the best possible way by your audience. Of course we welcome the great diversity in locales and the languages they use. We believe in the survival of dialects and the culture embedded in each spoken and written word… that is our business.