As a translation and localization industry professional and a team member of Globalization Partners International (GPI), I am involved with multiple projects across multiple languages.  I get a firsthand look at the intricacies, complexities and histories of languages around the world.

Asian languages are the epitome of intricate and complex, and with a long history, these languages are especially fascinating.  For this blog, I will briefly discuss the details and history of Japanese Kanji.

Kanji is the oldest written form of language in recorded human history, and it is comprised of over 10,000 characters.  It originated in ancient China and was used in China, Korea, Vietnam and Japan. Currently, Vietnam and Korea have their own written languages and no longer use Kanji, although you can occasionally see some characters still being used.  While their pronunciation is different, the meaning of Chinese characters and Japanese Kanji are, for the most part, the same.

Each character was originally created by drawing a picture to represent what was being communicated.  Once you understand the structure of the Kanji characters, especially when several characters are combined to create a word, it becomes easier to understand, and it all begins to makes sense.

Kanji is one of three scripts used in the Japanese language.  Children are first taught Hiragana at school, as well as its counterpart, Katakana, which is used to write western words.

Around the first grade, students are introduced to simple, single-stroke Kanji.

By the time they finish elementary school (6th grade), Japanese students will have learned approximately 1,000 Kanji characters. Then by the end of high school, that number grows to approximately 2,000.

If you do not know how to write certain phrases in Kanji, you can always use Hiragana.  Hiragana is similar to the basic English alphabet.  Each individual Hiragana character does not have any meaning when written alone and is used phonetically. If you do not know my name in Kanji you can always write it in Hiragana: 堤→つつみ. However, writing complete sentences using only Hiragana can look childish and reflects on your education and academic level.

“I am from Wakayama-city in Wakayama prefecture.”

Written in Japanese with Kanji:

The same sentence written in Hiragana:

The sentence written with Hiragana looks like it could have been written by an elementary school student.

Kanji often consist of several parts: some are singular components, while others are made up of several different Kanji combined into a singular character. Thus, there are effectively two different types of characters: those that use one Kanji component standing alone (that represents a single word), as well as those that are made up of two or more Kanji characters combined to create a more complex character. These are illustrated below. 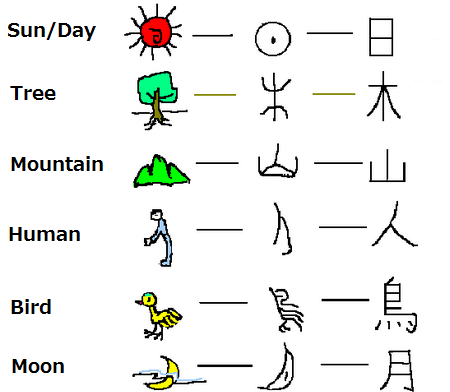 The left side of this Kanji represents wood or tree and the right side represents something flat.

As mentioned, Japanese people may not know every single Kanji they come across, however they can always guess its meaning based on its components and context.

If you see the above characters and don’t know what this Kanji combination is, you can make a guess based on the two characters used. Since the Kanji combination uses wood on the left, you can tell that it has something to do with wood or a tree. The right side has the Kanji character for flower. This tells us that the word must be for some sort of flowering tree.

The same goes for many names of fish, as most incorporate the basic Kanji for fish: 魚. If you go to a Sushi bar you may notice that their green tea mugs have the names of fish on them. 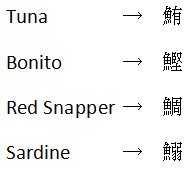 Once you understand and begin to recognize the structure of the Kanji characters, they no longer seem so strange.  For beginning or intermediate users, a little bit of knowledge goes a long way, and it can be fun to try and decipher what a new character means.  The complexities of the Kanji characters create a beautifully visual language.