Translators need to be careful when working with languages used in different countries and cultures. The French language is used in 29 countries, including Canada. According to a demographic report by the Université Laval and the Réseau Démographie de l’Agence Universitaire de la francophonie, French speakers will account for approximately 500 million people in 2025 and 650 million people by 2050. Depending on the location, lifestyle and social status, French is spoken and used differently.

As a Canadian professional in the localization industry, I grew up learning French in the Middle East, lived on the French side of Switzerland, in the capital of Canada, and spent a lot of time in Paris. I have come to find that some knowledge of the French language is very important when traveling in French speaking countries. In this blog, I will explain the difference between Canadian French and Parisian French. 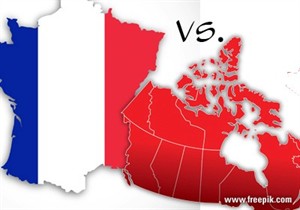 To understand why one language can be spoken differently, one must study the history of the regions it comes from. In the 17th century, French explorers arrived in North America and formed two French speaking colonies: Acadia, which is now called Nova Scotia, and New France, which is now Québec. When they settled in New France they brought with them the classical French language. In 1780, the British came in to rule this new world and in turn isolated the French colonies in Canada. This is why European French continued to develop in European countries, while Canadian French stayed in its 17th century form. Here are some 17th century phrases that are still being used today in Canada:

Later, the increase in industrialization caused an interaction between Canada and the United States and business was handled in English. This transition forced French speaking Canadians to adopt some English words into their vocabulary.

When I lived in Ottawa, I was exposed to French on a daily basis yet I barely used it, it got worse when I moved to Toronto where I only spoke English. The difference in written French in Canada is found in the grammar.  For example, in France many professions have the feminine form, in Québec professions are written universally. Such as:

In Canada, the dialect is very distinct and any French speaker could easily identify the difference. Canadian French is informal and this is generally noticeable in the pronunciation. The usage of idioms, grammar, words, cultural references and expressions is what makes Canadian French stand out to the European speaker.

Most Canadians are exposed to English as it is bordered by the U.S., and English influenced the way French is spoken through the grammar and terminology used as you can tell from some of these expressions:

While Canada tends to be influenced by the English language; European French tends to accept English words such as:

When focusing on Canada as a target audience, an understanding of the locations French is being used is essential. For example, other than the use of Anglicism, some Canadian words are taken from indigenous languages such as:

As any other language, translation services should always consider the area and culture they are targeting to avoid misunderstandings and issues with the target audience. An example of a common issue that can arise is found in restaurant menus. The word ‘dinner’ is ‘dîner’ in France, but in Canada, it means ‘lunch’ and their dinner is ‘souper’, this may confuse some tourists.

The French language is very complex depending on the location it is being used in. If your target audience is Canada then localization for Canadian French is necessary to get the right communication across especially if you are in the advertising business where culture appropriation is very important. However, if your target is Europe then standard French is the right option.