Global marketers planning to target the Middle East are missing a huge opportunity if they don’t translate their digital content into Arabic.

Below is a look at the size of the Arabic-speaking market.

Market research company Common Sense Advisory  states in order to reach 90% of the online community, you need to translate your content into 14 languages. Arabic is the seventh most important language online.

See The Top Ten Language Pairs for other leading languages.

Arabic is spoken in 27 countries, from Mauritania in northwest Africa to Oman on the Arabian Peninsula, and the number of Arabic-speaking Internet users has more than doubled since 2010; a much higher growth rate compared to other languages. (Source: Mideastmedia.org)

A study by Northwestern University in Qatar and Doha Film Institute surveyed 6,058 respondents across Egypt, Lebanon, Qatar, Saudi Arabia, Tunisia and the United Arab Emirates. They found that despite a rapid increase in the number of Arabic-speaking Internet users, Arabic content remains one of the most under-represented languages online in terms of its share of the world’s websites.

Even in predominantly Arabic-speaking countries like Egypt, a third of the top 50 visited websites are either not available in Arabic or do not include Arabic as the “default” or primary language. 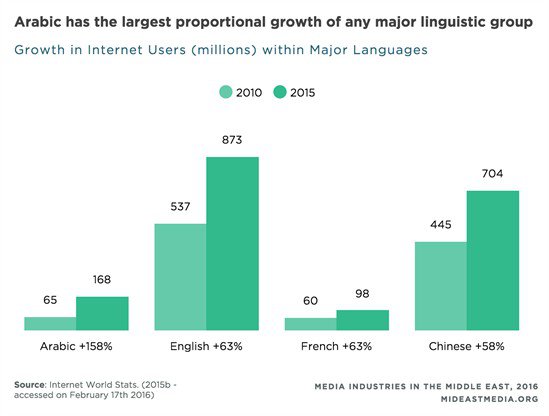 A May 2016 Gulfbusiness.com  report quoted CEO of the Doha Film Institute Fatma Al Remaihi as saying, “The Pan-Arab media industry is growing faster than the economy, at about 19 percent per year with both online and offline channels experiencing rapid expansion.”

Additionally, globalarabnetwork.com reported that ecommerce is growing 45% annually in Arab countries, compared to 20% in Europe and 35% in Asia (2015).

This highlights the tremendous opportunity for marketers to reach the Arabic-speaking population, in their own language. It is also paramount that, along with translating and localizing a business website into Arabic, marketers consider the growing social media landscape in the region. Marketing company Extradigital  reports that Facebook and WhatsApp are the most popular social media channels while LinkedIn and Twitter also show substantial numbers of users.

However, as a recent survey by Common Sense Advisory  points out, marketers need to consider the many regional variants of Arabic. While Egyptian Arabic has 89 million native speakers out of a total of 166 million, marketers need to thoroughly research the dialect spoken in their target country to ensure they reap the benefits of appropriate localization.