The Islamic holiday, Eid Al Adha, will fall on September 12th this year and end on September 13th. It is observed annually on the tenth day of Dhu Al-Hijja and is celebrated by Muslims all across the world.  Eid Al Adha, also known as ‘Greater Eid’, is considered the holiest day of the Islamic calendar. It translates to ‘Feast of the Sacrifice’ and marks Ibrahim’s willingness to accept the command of Allah and to sacrifice his only son, Ismail. An animal sacrifice symbolizes Ibrahim’s sacrifice. 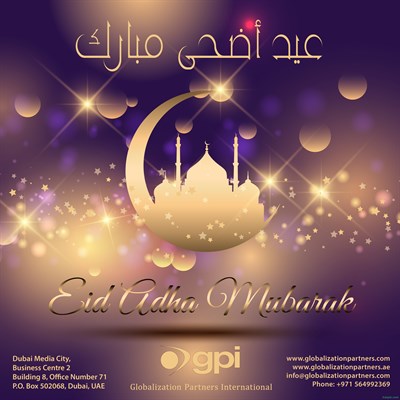 Eid Al Adha around the World

The date of Eid Al Adha varies in accordance with the Islamic lunar calendar, and differs geographically. Although there are very traditional customs that remain unchanged, there are also certain festivities that vary from region to region.

Some traditions may vary across Muslim regions for celebrating Eid, but the Udheya and the sermon are common amongst them as Islamic traditions. Inshallah we will celebrate Eid with our loved ones!

GPI would like to wish all Muslims across the world “Eid Mubarak”!