There are more than 1.6 billion Muslims around the world, representing approximately 24% of the world’s population. Ramadan, which is a very special and holy time for Muslims, has officially started for 2017. During Ramadan, when the adhan is announced at dawn, fasting begins as the faithful are called to perform the first of the five daily prayers. At least one hour before adhan is announced, many Muslims wake up for suhour, which is the morning meal. Fasting lasts from sunrise to sunset and is broken at the end of each day by sharing meals, called Iftar, with family and friends. Because there are so many Muslims in different parts of the world, in Africa, Europe, the Middle East, Asia and everywhere in between, there is a fascinating variety of Ramadan traditions. 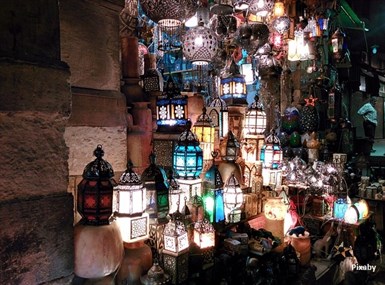 In this blog, I will highlight some of my favorite Ramadan traditions around the world.

Although Muslims can now simply set an alarm clock to wake up for Suhour, it was traditionally the job of the Mosaharaty in the Middle East and North Africa region to wake people up. The Mosaharaty would walk the streets, beat his drum, call for the sleeping people to wake up and praise Allah and remind them that Ramadan is the month of forgiveness. In smaller cities and villages, he sometimes called individuals or household names. This tradition is still alive in some places like Cairo, Egypt. It brings back a sense of nostalgia to simpler times before technology.

Ramadan bags are a tradition in some countries where families, friends and companies prepare packages of staple foods to be distributed to the less fortunate. Even some schools practice this tradition to bring the students together and teach them the values and morals behind it. The bags usually include pasta, rice, beans, tomato sauce, oil, sugar and other packaged foods that can feed a family during the month of Ramadan.

An even more heart-warming tradition in many countries is when people stand in the middle of busy streets right before sunset to distribute water and dates to passers-by in cars. If you still haven’t reached your home by sunset, chances are you might miss the adhan, and so these kind people help you break your fast on time. 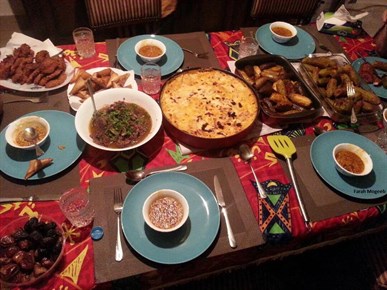 The night prayers, also known as Taraweeh, are a widespread Islamic tradition. Mosques all over the world will be packed full and practicing Muslims will be prostrating and standing in prayer while their leading Imam recites the Quran. It isn’t obligatory to perform Taraweeh, unlike the five daily prayers, but the goal is to have completed the entire Quran by the end of the month.

It is Islamic tradition to break the fast with simple foods like dates and goat milk, but most cultures have special dishes that play an important part during Ramadan for their first meal. Below are dishes some cultures eat for their Iftar meals.

Items that are common among all Muslims for Iftar meals are dates, various chicken dishes, fruit juices and lots of water.

Ramadan Kareem from all of us at GPI!