Hainan is an island province in southern China, it is known as the “Hawaii of China.” Wei Kailei, Dean of the College of Tourism at Hainan University, calls it “an island of leisure, vacation and longevity. The blue sky and pure water are even more precious, contrasted with the rest of the nation plagued by smog.” He also said, “itis the largest special economic zone, the only international tourist island and the first tourist model construction zone in China.” 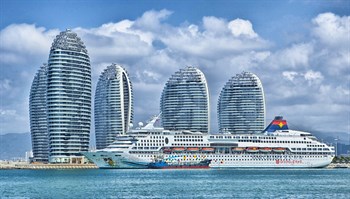 There are a growing number of lavish resorts and hotels in Hainan, each trying to outdo the others. As the grandeur grows, so do the number of tourists visiting from China and around the world.

A recent CNN article states that according to the provincial statistics bureau, more than 60 million tourists traveled there in 2016, up 12.9% from 2015.

The island is becoming so extravagant that people are comparing it to Dubai. Promotional content for Hainan’s Phoenix Island described the private, luxury island located in the Bay of Sanyayan as the “Oriental Dubai.” Phoenix Island connects to the city of Sanyavia a long bridge, which only guests can cross.

There is also a 108-meter high statue of the Bodhisattva Guanyin on an artificial island, which was completed in 2005.

As these luxury resorts and tourist attractions continue to be built, travelers from all over the world will continue to visit Hainan. But, it is yet to be seen if these ambitious building plans will rival the lavishness of Dubai.

To read more, please see: Hainan: Is this where Hawaii meets Dubai?