Unlike English, Arabic is written and read from right to left (RTL language also known as bidirectional language). In addition to this, you may need to consider cultural differences for the variety of Arabic markets, as the Arabic language has many different styles as it is spoken in more than 22 countries with different dialects.

In this blog, we will point out the language differences between English and Arabic. 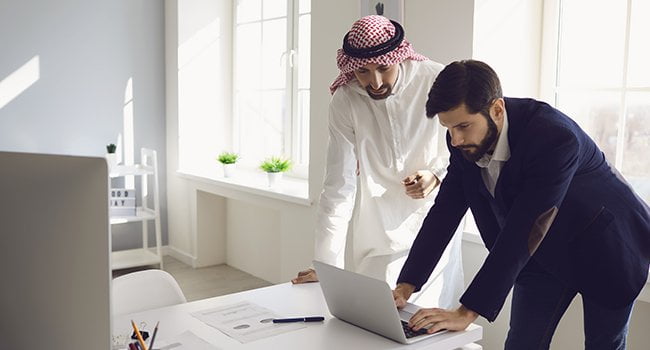 The Arabic language is a unique and poetic language that has unique expressions that are used in everyday conversations and writings that do not have equivalent translations in English.

English: Does not have English equivalent

Usage: To express amazement, thankfulness, gratitude (without grudge or jealousy)

Usage: According to the context, it may be used in many ways, from “Peace”, or a greeting “Hello- Bye”, or an adjective “Safe”

Arabic is written using the Arabic Script, it is the same writing script for Persian, Urdu, Dari, Kashmiri, Kurdish, Punjabi, Sindhi, Pashto, Urdu, Rohingya, and Uyghur languages. There are no uppercase and lowercase letters in Arabic, though shapes of letters usually vary depending on whether they are in an initial, middle, or final position in a word. Arabic words are written in a cursive style, which means most of the letters are written in slightly different forms according to whether they stand alone or are joined to a following, or preceding letter.

In Arabic, there are 2 types of sentence structures: Nominal sentences and Verbal sentences.

English: The weather is hot.

In most cases when the nominal sentence is not about being, it should include a verb to be well understood.

English: The boy is playing.

Like English, Arabic sentences can be longer to contain an object to be Subject-Verb-Object (SVO).

English: The boy is playing football.

A verbal sentence is a sentence that starts with a verb and a subject follows, and then an object (VSO). The subject can be a noun, a pronoun, a demonstrative, or a relative clause.

The defining property of a verbal sentence is that the verb precedes the subject. There is more than one possibility for verbal sentences in the presence of an object, an adverb, a prepositional phrase, etc.

English: The boy reads the book. 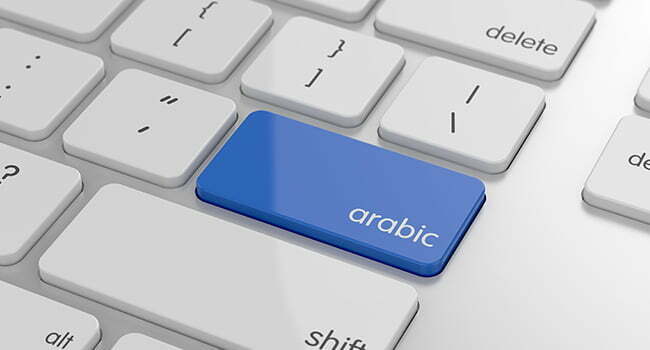 As the Arabic language is officially used in more than 22 countries, it has been adapted and can be written in different dialects depending on the country or region. The most used Arabic dialect that is written and understood across all the Arabic speakers is the Modern Standard Arabic (MSA). Modern Standard Arabic is a universal form of Arabic one of the 6 official languages of the United Nations. So, when it comes to translation into Arabic, it is most likely to be into MSA, unless this is specifically requested.

Some of the major Arabic dialects are:

Egyptian Arabic: The most widely spoken Arabic dialect, not only in Egypt but across the Middle East and North Africa. It uses much of the same vocabulary found in MSA with some minor differences in pronunciation of certain words and letters.

Levantine Arabic: The second most spoken Arabic dialect after Egyptian Arabic. It is spoken in Jordan, Lebanon, Palestine, and Syria.

Gulf Arabic: Spoken in the Persian Gulf countries like Saudi Arabia, Qatar, Kuwait, Bahrain, Iraq, and the United Arab Emirates. It is made up of several dialects which differ in vocabulary, grammar, and pronunciation.

Maghrebi Arabic: Spoken in Morocco, Tunisia, Algeria, Western Sahara, Libya, and Mauritania. This dialect is distinct from MSA, that it has its name – Darija (الدارجة). The Maghrebi dialect is made up of several other dialects such as Moroccan Arabic, Algerian Arabic or Tunisian Arabic.

Although Modern Standard Arabic is a written and scholarly standard, it is not the version people speak in their everyday lives. Spoken Arabic dialects and MSA have a few differences, for example: