Latin American Spanish is a term used to describe the Spanish language spoken by the populations of Mexico, most of Central and South America, Cuba, the Dominican Republic, and Puerto Rico. Each region introduces its own dialect and pronunciation differences, but the written language is sufficiently similar to group into the same category.

At the time of localization, even though any Spanish-speaking person in Mexico will clearly understand a written text from someone in Argentina, it is very important that the subtle differences among the Spanish variations are taken into account so the target audience has the feeling of reading a text truly addressed to them. 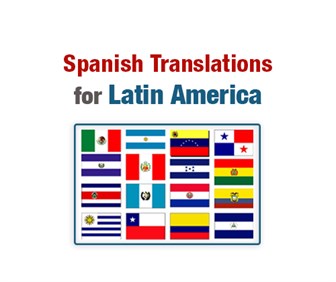 The Spanish in Latin America varies from country to country and even within the countries themselves. These are some of the major characteristics of Latin American Spanish:

In Spain, both forms of the plural pronoun “you”, “vosotros” (you all, informal) and “ustedes” (you all, formal) are used, while in Latin America “ustedes” is always used and with all the corresponding verb conjugations.

In the Caribbean, much of Central America, the entire Pacific coast of South America, the Rio de la Plata nations and some areas of Mexico, many consonants at the end of a syllable or word are either weakened or lost altogether. This is especially the case with the final “s” sound. For example: “los niños” (the children) ends up sounding more like “loh niñoh”, “adios” (goodbye) sounds like “adioh” and the clause “esto es lo mismo” (this is the same) sounds more like “ehto eh lo mihmo”.

In words with a “d” between two vowels, the “d” is often dropped so that “cansado” (tired) sounds like “cansao” and “pecado” (sin) sounds like “pecao”.

The “r” is also commonly dropped from the end of verb infinitives, so that “comer” (to eat) sounds like “comé”.

The double “L” (“ll”) is pronounced like a “y” in the Latin American speaking countries:

In the Caribbean region and in parts of Chile, there is certain confusion between the “l” and “r” sounds. The “l”, when placed before a consonant in a word, is often pronounced as an “r”. For example, the word “alma” (soul) will often be pronounced “arma”.

A perfect example is Argentina, which has a great number of words that are spoken nowhere else, known as “lunfardo”. These can include sometimes untranslatable words such as “vivo” – a word that is used to denote a person who can get away with things; a hustler. A related term is “avivarse”: to get wise to things; gain experience; learn not to get taken advantage of. Another popular expression, with origins in lunfardo, is “che” which is roughly equivalent to the English “hey.” Certain Argentines use the word “che” all the time, especially when they’re angry. As in “Che, what are you doing? Che, where are you going? Che, get back here!”

There are significant differences in vocabulary among regional varieties of Spanish, particularly in the domains of food products, everyday objects, and clothes.