Spanish is spoken by more than 500 million people worldwide and is the official language of 20 countries. It is a diverse language and there are many Spanish dialects around the world.

We can distinguish eight primary dialect classifications: Castilian, Andalusian, Canarian, Caribbean, Mexican-Central America, Andean, Chilean and Rioplatense. In addition to these classifications, there are more geographical and social varieties. 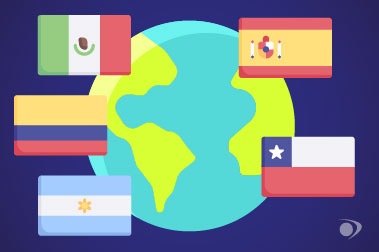 We can highlight three primary distinctions among dialects: phonetic, grammatical and vocabulary.

One example of a difference in phonetics is the “seseo”, which is the pronunciation of the letter c and z as the letter s. Most Castilian speakers in Spain when pronouncing the words “cereza” or “cebolla” (cherry and onion, respectively), pronounce the /c/ and /z/ with the dental and fricative phoneme [θ]. However, in America, speakers pronounce it with [s]: [seresa] and [sebolla].

Regarding grammar, the most remarkable difference is the so called “voseo” (referring to someone as “vos”).

In Spain, people use the following personal pronouns: “tú” (singular, informal), “usted” (singular, formal), “vosotros” (plural, informal) and “ustedes” (plural, formal). However, in America, Spanish speakers use “vos” and “ustedes”. This creates a big difference when conjugating verbs. Moreover, the Spanish pronoun “vosotros” does not exist in most of the Latin American countries. In English, this is much simpler because the equivalent pronoun is “you”. 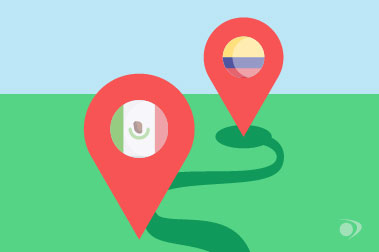 There are many differences in vocabulary. For example, in Spain, the word “coche” (car) is used; in Argentina, people use “auto” and in Mexico, “carro”. Another example is something is “bonito” (pretty) in Spain, but is “lindo” in Mexico.

Below are more examples of vocabulary differences between Spain and Latin American countries.

Most Spanish speakers can understand each other, although sometimes it is necessary to clarify the meaning of some words. But this scenario changes when one speaker is not a native Spanish speaker or only has basic knowledge of the language.

These differences among Spanish dialects are why it is important to know your targeted audiences. The variations in pronunciation, grammar and vocabulary may seem small, but to your target audience they show your dedication to creating content that is specifically designed with them in mind.