“Do you know what the difference between the two processes is? And what about what they have in common?”

Translation is the process of translating/converting words or text from one language into another one.

Localization (L10n) is the process of adapting a foreign product or service to the particular language and culture of another market or country. 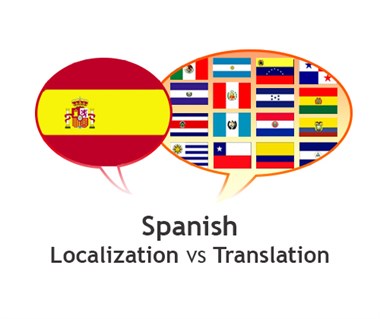 So we can say that when we talk about localization, we are talking about a translated text that is not only limited to the exact rendition of the terminology in the target language, but also reflects the special cultural aspects of the target market. That is to say, a localized text is an adaptation from both the linguistic and cultural points of view.

What kind of text do you think can be localized then?

Well, we could say that all kinds of text can be localized: literature, manuals, websites, software, brochures, letters, terms and conditions, etc.

Let’s think of the localization of a manual or other kind of documentation. Sometimes there are words that need to be not only translated but also localized in order to avoid negative connotations or to simply sound natural in the target language. For example:

The process of localization also includes other kinds of techniques and knowledge that are not purely linguistics. The importance of choosing the correct colors in the localization of a website or a multimedia application for example can avoid a negative impact on the target audience. To mention a few instances:

Localization also plays a key role in software translation. Date and time formats as well as monetary systems change from one country/language to another, so it’s crucial that these kinds of elements are properly adapted according to the target language. Another example is language expansion. The localized Spanish version of a dialog box will surely be longer than its original English form, so the screen length will have to be localized for the target language version.

Particularly speaking about Spanish localization, one of the main considerations for Spanish translators is locale. As you can tell from the above examples, Spanish for Spain, Puerto Rico or Argentina is understandable across the Spanish speaking countries, but it’s definitely NOT the same Spanish. So suppose a client requests that you translate an English website into Spanish, what locale would you use?

First of all, I suggest you ask your client where the target audience is. If he says Spain, problem resolved! But what happens if he says Spain, Puerto Rico and Argentina? Well… we have two acceptable options here:

The Neutral Spanish option sounds more reasonable and needless to say, less expensive. It’s a variation of the Spanish language without the use of colloquialisms or locale-specific terminology. It uses more informal terminology and certain verb tenses and allows the greatest number of Spanish speakers around the globe to understand the translated message.

I must say, it’s a mission fulfilled in many situations and with great results. Going back to my previous examples, instead of translating “computer” as “computadora” which would be too Argentinean, or as “ordenador” which would be too Spaniard, a perfect Neutral Spanish version for this technical term would be “equipo” which is commonly accepted and sounds natural in all countries.

Unfortunately, we don’t always have a common term that can be used in all Spanish versions and sounds really natural and culturally appropriate to the same degree. So many times we’ll have no other alternative than to provide two different Spanish versions, even though much of the content will be very similar.

In conclusion, we can say that today the translation profession is not an isolated one anymore. Most of the translators, whether they are freelancers or not, are inevitably part of a localization services team made up of linguists -translators, editors and proofreaders-, project managers, engineers, desktop publishers and website designers among other professionals, who participate in the localization project from file preparation, translation, localization and testing to final delivery, in order to provide their clients with the translated content they had requested as if it had been originally thought, written and designed in the target language.