The Chinese market is a unique market for search engine optimization and marketing. In order to gain visibility and achieve good results in the Chinese online market you will need to understand several facts about the Chinese Search Engine Optimization (SEO). Definitely the first fact you will need to learn is what are the top search engines used by the Chinese online consumer? It is hard to argue that Google is the most popular search engine in most countries in the world, but for China the stats tell a different story.  According to recent research by Sitepoint , there are only 5 countries whose local engines are beating Google, and China is one of them. Baidu is the top search engine in China with almost 70% market share.

Google uses its names all over the world except for China. Google China is known as 谷歌, mainly a transliteration of Google.  In January 2006, Google launched its China-based search page (google.cn) and hence became subject to censorship by the Chinese government. In 2009 the Chinese government blocked access to Google’s YouTube site because of footage showing Chinese security forces beating Tibetans. In March 2009 Google started to redirect all search queries from Google.cn to Google Hong Kong in order to bypass Chinese regulation and generate uncensored Simplified Chinese search results as Google.com.hk does not censor search results. After a year, Chinese government banned all Google search sites for all language versions and Google Mobile. The ban was lifted the day after, but the decline of Google search usage in China was doomed. According to cnbeta.com stats in June 2013, Google’s Traffic share in China is 2.13%.

Baidu incorporated in January 2000 by Robin Li and Eric Xu. In addition to their core web search product, they provide many community services. “Baidu Knows” is the world’s largest Chinese-language interactive knowledge-sharing platform. “Baidu Baike” is the largest user-generated Chinese-language encyclopedia. Baidu Postbar is the also world’s first and largest Chinese-language query based searchable online community platform. In December 2007 Baidu was included in the NASDAQ-100 index- the first Chinese company to make the list.

At one point Baidu’s share was at 80%. It has declined to a little under 70% due to the rising competition in the Chinese search engine market. The pressure is mainly from Qihoo 360. Qihoo started as a software company, providing antivirus products. In August 2012 they started their own search engine (So.com) and soon became number 2 in China. Their share of the market is still growing. Between June and December 2013 it has increased from 15.26% to over 20%. Number 3 and Number 4 (Sogou and Soso) are also Chinese companies with 8.83% and 3.4% of the market share. 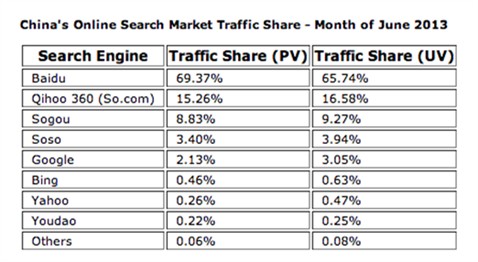 Since Baidu and is the top search engine in China, Chinese SEO should include the best practices for Baidu and other top Chinese search engines. Many SEO experts assume that Baidu’s results and algorithm are similar to Google but that’s not correct. There are many differences that should be considered during search engine optimization for Baidu. In the table below there are several key differences between Google and Baidu based on their SEO importance. 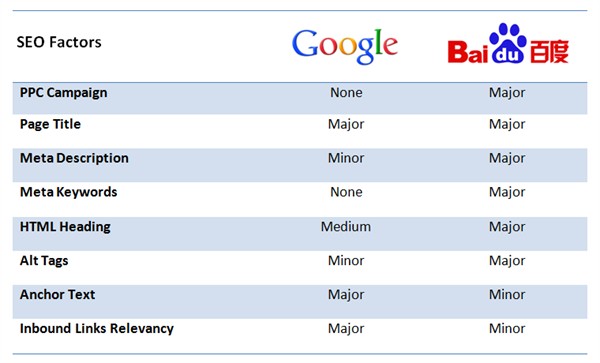 In my next blog I will share more tips and challenges of leveraging the Baidu search engine and how to optimize content for it. Specifically I will cover what SEO specialists need to focus on when they are developing a SEO strategy for Chinese market.