If you are considering doing business overseas, particularly in Europe, Germany should to be on the top of your country list. As Europe’s most powerful economy and fourth largest in terms of nominal GDP worldwide, Germany also has the largest online population in the European Union. Globalization Partners International’s newly updated country research reports also include one tailored to the German market and focuses on website globalization and e-business. This report touches upon a range of topics relevant to the German consumer, from language to culture, search engine marketing to website translation tips for Germany. The accompanying infographic illustrates some of those key factors that are quite compelling. 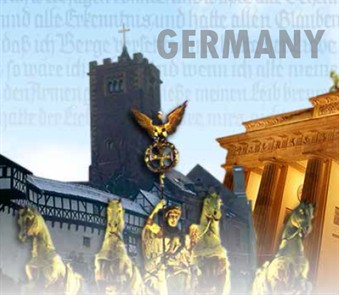 There are a number of factors to consider if you wish to be successful in marketing to the German marketplace. This blog post will provide some highlights of our recent whitepaper report on understanding the nature of the German market, as well as the cultural values of German consumers in order to help you achieve the best results as you enter and conduct business in Germany.

Facts about the German Market

Germany is a western society that shares some of the common symbols and traditions of other western cultures, yet it has its own unique and rich culture. At a macro-level, the German culture can be described using the five cultural values Individualism-Collectivism, Power Distance, Masculinity-Femininity, High-Low Context and Uncertainty Avoidance based on the work of Hofstede.

Cultures that rank high on individualism such as Germany tend to typically value individual goals over group goals and appreciate and emphasize independence and self-expression. At the same time, the German culture is high on power distance and its belief in authority and hierarchy (high power distance), and is low on egalitarianism, meaning that in such cultures less powerful citizens accept unequal power distribution in society.

Today social media influences all online communications. Simply localizing your website content is no longer enough, as understanding the social media landscape in Germany has become one of the most important components for online strategists looking to leverage those same channels for the German consumer.

Key Insights from the Digital Landscape in Germany:

Culture and Online Shopping in Germany

The following infographic provides several useful facts and insights about Germany. The infographic contains a handy graphical sampling of what’s inside the report.

If you are planning to do business in Germany, it is important to understand the needs of your target customers. You need to understand the consumer behavior, the language and the key insights about the market. Our updated research report for the German market on website globalization and e-business along with accompanying infographic covers a range of topics from language facts to website translation tips for Germany. 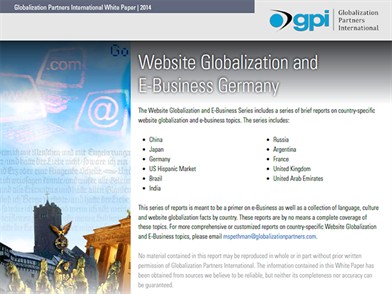 The Germany country research report is 14+ pages and provides useful information and statistics about the country and local consumers and market. The newly updated report for 2014 is available in PDF format and is free to download at: Website Globalization and E-Business – Germany.

Looking to sell your Goods or Services in Germany?

If you are looking to expand into the German market and have a website localization project in the works, this report is for you. First published in 2008 and newly updated for 2010, 2012, and 2014, the report contains tips and information on e-business, website translation and web consumers in Germany. The report also has a nice link library with useful sites and resources for those wanting to do business in Germany.