iOS 8 is the mobile operating  system of the iPhone, iPad and iPod Touch and was released on September 17, 2014. According to the Apple website, iOS 8 is actually the biggest release for developers since the introduction of Apple’s App Store. This new version also boasts the smartest keyboard ever. The keyboard offers English and other enabled languages on the device, along with the ability to install a third party keyboard, which is a new feature available on iOS 8. 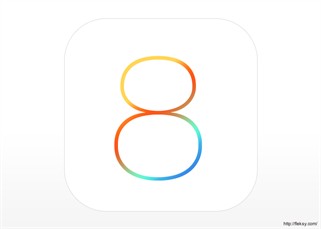 A highly anticipated new feature of iOS 8 is that applications are available in any language even the ones not yet supported by the Apple operating system. iOS 8 follows language codes (ISO-639), for example: Arabic (ar), Hebrew (he), Simplified Chinese (zh-Hans), etc…  As an example to show how iOS handles multiple languages, we are going to use Arabic to illustrate the different features available. iOS was one of the first Smart Operation Systems that supported the Arabic language. It has been supported since 2003 when iOS 3 was introduced.

First, to set your default language:

Then, select your default device language from the languages list. 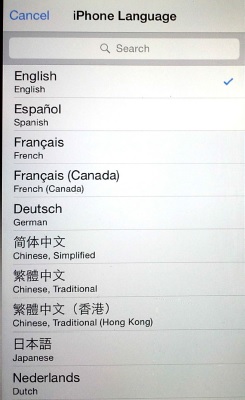 Next, to add more languages and set their order: (Browsers and Mobile Applications will display menus and commands based on the default language selected in the first step). 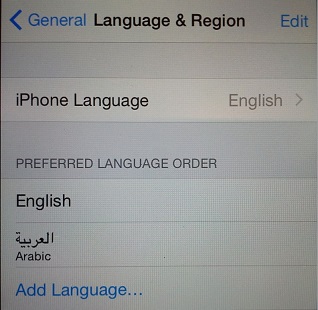 An important new feature is the Preferred Language Order. Before iOS 8, the default language was the only language option for installed applications, such as Facebook and Twitter. Many users prefer to use English as the device’s main language for menus and commands, but wish to display their applications in their native language. iOS 8 allows this option through Preferred Language Order.

Select the Settings icon > General > Language & Region > Region: users can select the preferred numbers, date and currency formats based on a selected region and calendar. 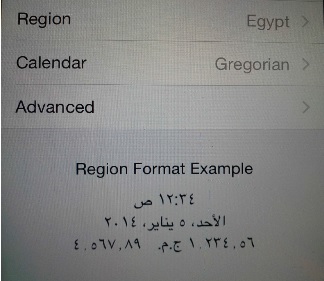 Following the above simple steps, iOS devices should be able to display multiple languages correctly, along with your preferred format based on your language, region and calendar selection. 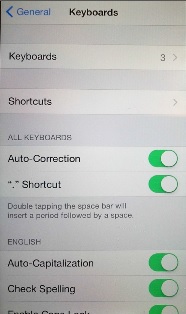 The above screen shows the following settings:

–     Keyboards: shows number of active keyboards based on enabled languages.

–     Auto-Correction: enable/disable auto-correction based on the current selected language.

–     The English section lists a set of typing features available only for the current default language, such as check spelling and auto-capitalization.

Since the release of iOS 8, Apple has enabled applications developers to create extensions for the current iOS applications for example, a translation plugin for Safari browser, which was not possible with the previous versions. This new approach opens great opportunities for better localized applications designed for iOS.