Arabic is a Semitic language, written from right to left. It has a highly connected script, so letters seldom stand alone, and the shape of each letter varies considerably depending on its position in the word. This makes Arabic a highly complicated language for non-Arabic readers and handling any Arabic text by non-native speakers can be an adventure. 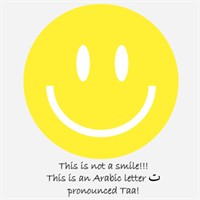 Many points must be considered when formatting Arabic text.  Ignoring these points may lead to corrupted text and an incorrect order of words, resulting in wrong or incomplete meaning.  These points will be illustrated using InDesign, as it is one of the main tools used in handling Arabic texts, ranging from manuals and brochures to flyers and books. These points apply to other tools, as well, but will vary depending on the tool used.

If you are formatting an Arabic file that was created originally in a European language and translated to Arabic, you have a feature in InDesign in which you can mirror the whole layout to run from right to left in one step.  Select Reverse Layout from the Layout menu where you can choose if you would like to reverse all or some pages and you can select if you would like to flip images, text frames, story directions, tables and object angles.

Objects, layouts, images and figures are also positioned from right to left to follow the text. In the localized files, making the decision to flip an image or figure depends on the content. Logos, barcodes, and machine images cannot be flipped, but some charts and figures have to be flipped.

This is one of the most important features you MUST take care of when handling Arabic. From the options in the paragraph panel menu (Windows> Type & Tables >Paragraph>Panel Menu) you must select either: Adobe World-Ready Single-line Composer or Adobe World-Ready Paragraph Composer. Not selecting either of them means that InDesign is dealing with Arabic as a Latin Left-to-Right language, so you will see Arabic letters not joined and ordered from left to right. 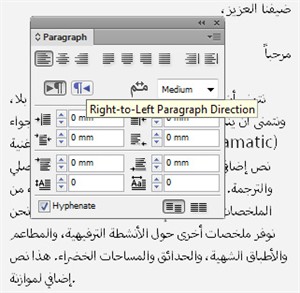 The Character Direction feature is critical when it comes to bi-directional text, brackets, numbers, dates and multilevel list numbering. These are things that need to be redirected to right to left on the character level. You can choose between the Right-to-Left, Left-to-Right, and Default from the Character Panel (Windows> Type & Tables >Character>panel menu > Character Direction). 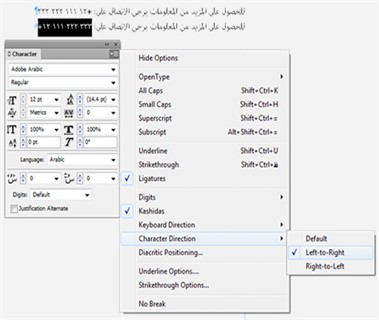 The story, in this instance, means the flow of the text from column to column. In Arabic and other Right-to-Left languages, the first column will be on the right side and the subsequent columns will be added to the left. You can change the story direction in InDesign from the Story Panel (Window >Type & Tables>Story).

The first column in a Right-to-Left language is the most right column and any additional columns will be added to the left. In the table creation window, you have an option to set the table direction RTL or LTR. You can also change the direction of the table through (Table > Table Options > Table Setup > Table Direction).

Although Arabic is a Right-to-Left language, the numbers in Arabic are written from left to right. You have to pay special attention to the direction of the numbers inside the text. Dates and phone numbers are always put in the right to left direction, like the text, and should be fixed using the Character Direction feature.

The default digit type for Arabic is Hindi and this is the correct and most commonly used, but sometimes, you are instructed to use Arabic digits instead though this is not common.  In InDesign, you have the option to select between Arabic, Hindi, Farsi and default. 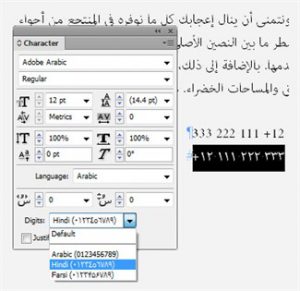 As stated in the Numbers and Digit Types section, you should use the default Hindi digits for numbering in Arabic, as long as there are no instructions to use Arabic digits. This applies for any use of numbers whether in text, pagination or numbering lists.

For multilevel numbering lists, the first level will be on the far right, and the additional levels are added to the left.  You can choose between the Right-to-Left, Left-to-Right, and Default from the Character Panel (Windows> Type & Tables >Character>panel menu > Character Direction).  The separator dot between the levels should be replaced with a dash (-) to fix the direction or you will have the dot converted to the default decimal separator for Arabic which is a comma (,) and the levels are ordered from left to right. If this happens, it would be unreadable.  ABC numbering is replaced in Arabic with (Arabic Abjad…) or (Arabic Alif Ba Tah…). 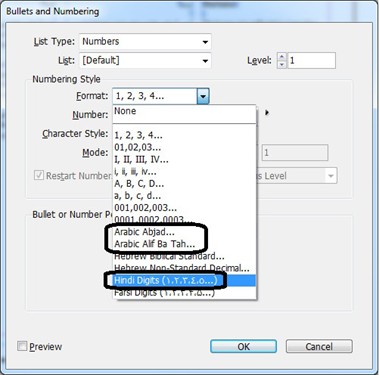 The points in this blog are the main considerations one must make when desktop publishing Arabic text.  Failing to address these topics will result in incorrect numbering and corruption of text.  If you are working with certain texts, like Quranic text, for example, other Middle Eastern advanced features like ligatures, diacritical marks, and diacritical coloring must also be addressed; however these types of text are typically handled by Arabic native speaking specialists.