What is the first thing that comes to your mind when you hear the country name, “Azerbaijan”? You may think, rich oil and gas country, the First European Games or Eurovision Song Contest. But, Azerbaijan is far more than that.

Azerbaijan is located on the coast of the Caspian Sea, and shares borders with Russia, Turkey, Iran, Armenia and Georgia. The capital of Azerbaijan is Baku, which means “City of Winds” when translated from ancient Persian and it is really a windy city; there is not a single day in a year without wind. 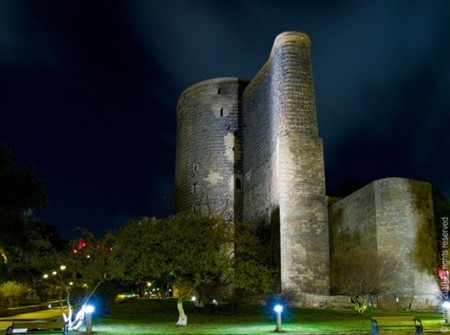 The majority of Azerbaijan’s 9.5 million people are Azerbaijani, a Turkic ethnic group.

You can see all kinds of terrain in Azerbaijan: the mountains and lowlands and plains, and valleys. Approximately half of the territory of Azerbaijan is occupied by mountains. The highest point in the country is Bazarduzu Mountain or Dividing Range (4466 m). In the central part of the country is the Kura-Araz lowland and the Lankaran lowland in the southeast.

The first evidence of human presence on the territory of modern day Azerbaijan was found in the Azykh Cave and dates back to the Stone Age.

In 1918, Azerbaijan was the first Democratic Republic in the Islamic World. In 1920, it became a part of the Soviet Union. On August 30, 1991, Azerbaijan proclaimed its independence.

You might wonder why Azerbaijan is called the “Land of Fire.” This goes deep into history when people were worshipping the four elements: ateshi (fire), badi (air), abi (water), and heki (earth). Atashgah, a fire temple located in Baku, was a pilgrimage and philosophical center for Zoroastrians.

It stopped being a place of worship in 1883, when the petroleum plants were installed there. In 1975, it became a museum, and the annual number of visitors is around 15,000.  Atashgah is now a World Heritage site.

For all these reasons Azerbaijan is called “Land of Fire”, which every Azeri is very proud of.

Azerbaijan has very unique architecture, combining Eastern and Western elements. It is a beautiful mixture of old and modern.

The Maiden Tower and Palace of Shirvanshah, which are located in “Old City”, in the center of Baku, represent ancient Iranian architecture.

You can also find lots of very unique, modern architecture in Baku, among which are: Heydar Aliyev Cultural Centre by famous Iraqi-British architecture Zaha Hadid and Flame Towers, the tallest skyscraper in Baku with the height of 190m (620f).

Azerbaijan is a developing country, with a rapidly growing economy. There are a lot of business opportunities in construction, tourism and trading. There are many new hotels opening in Azerbaijan, especially in Baku. Azerbaijan is working towards attracting more tourists to visit and enjoy the beautiful scenery and experience a cultural mixture of East and West.