Linguists and cryptographers are familiar with the 600 year old Voynich manuscript, a book most famous because no one knows how to read it. Originally belonging to Italian Jesuits, it was discovered in 1912 by Polish antique bookseller, Wilfrid Voynich, and today is housed at Yale University’s Beinecke Rare Book and Manuscript Library.

The book’s 250 vellum pages (from the French veau and referring to a parchment made from calf skin) are written in a language consisting of 20-25 unique characters placed in an indecipherable order and have never been seen in any other known text. 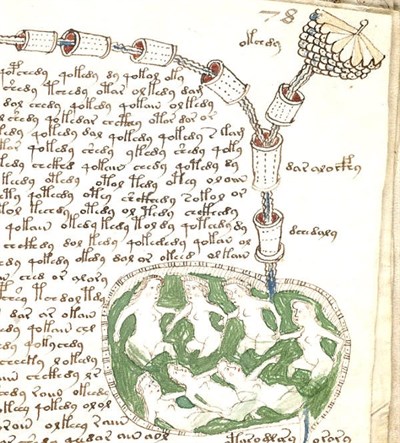 It is illustrated with vividly colored images of medicinal herbs, plants, Zodiac symbols and naked women. Carbon dating has shown that the book dates back to the 15th century, and researchers believe it was written in Central Europe.

In February 2014, LiveScience reported that Stephen Bax, a professor of applied linguistics at the University of Bedfordshire in England, had deciphered 10 words and 14 characters of the script and can read a handful of items in the medieval text, such as the words for coriander, hellebore and juniper next to drawings of the plants.

Long-time Voynich Manuscript researcher and über-skeptic Rene Zandbergen has spent years analyzing the writings from many angles, and today is one of the best-known authorities on the book. In his blog, Voynich.nu, he says he believes the manuscript originated North or South of the Alps and is the work of one ‘brain’. He also suggests it could have been created by someone who wanted to attract clients to his medications. Or, it could be a masterpiece belonging to one of the secret societies of the time.  No one knows.

Yale University reportedly receives thousands of messages every month from people claiming to have cracked the code through studying images of the manuscript available online, but none have proved to be legitimate.

A 2013 study published in the journal, PLOS ONE, claimed that “Voynichese” statistically adhered to linguistic rules. Although the study authors couldn’t decode any words, they could at least tell that the pattern of letters followed Zipf’s Law – the most common word in a language will appear about twice as often as the second most common word and three times as much as the third most common word, etc.

898 Copies of the Voynich Manuscript to be Printed

Now, The Guardian reports, a publisher called Siloe based in Burgos, Spain, will produce 898 copies of the Voynich manuscript, replicating every detail down to the pages’ stains and tears. The process will take 18 months to make the first facsimiles and the printed pages will be aged and every stain, hole and sewn-up tear in the parchment reproduced. The publisher reportedly plans to sell each of the facsimiles for about $7,900 to $9,000 (7,000 to 8,000 Euros).

Described by some skeptics as an ancient hoax, others who love languages and unraveling puzzles, and have the money, will no doubt rush to get their hands on a copy once Siloe makes them available. And then spend the rest of their life trying to make sense of it.

Read the full report: Tiny Spanish publisher wins rights to Voynich manuscript – the book no one can read.