Doyon is one of Alaska’s regional corporation and runs more than a dozen companies. The 12.5 million acres of land in Alaska’s interior they own is home to 10 ancestral languages, including nine Athabascan languages plus Inupiaq, and represents half of the 20 Native languages spoken in the state of Alaska.

According to the Doyon Foundation, all of the Doyon region languages are severely to critically endangered and will be lost within the span of a few generations if no action is taken. The loss is attributed to the rapidly decreasing health of fluent Native language speakers which prevents the languages from being passed on quickly enough to ensure their survival.

In 2009, the Doyon Foundation, with support from Doyon, Limited, established a language revitalization program to ensure the cultures and languages of the Doyon region are taught, documented and easily accessible. 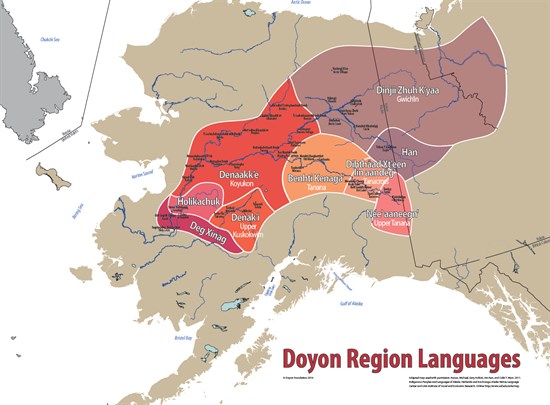 Early in September 2016, the language revitalization program received great news when the Administration for Native Americans (ANA) announced that the Doyon Foundation was selected to receive a Native American Language Reservation and Maintenance grant of $900,000 over a three-year period.

The grant will help fund the Doyon Languages Online project, a partnership with 7000 Languages, which is a non-profit organization that makes leading technology available to language teams working with lesser-known and under-resourced languages.

While the Foundation aims to create online courses for all the Doyon region languages over time, during the three-year grant project, 280 introductory online lessons will be created for five of the Doyon languages: Holikachuk, Denaakk’e, Benhti Kenaga’, Hän, and Dinjii Zhuh K’yaa.

Doris Miller, Foundation Executive Director said: “As Native people, our languages are part of our identity and are very precious to us. Our children, grandchildren and great-grandchildren deserve to have the opportunity to learn their language.”