In this blog, I will briefly discuss the economy, political environment, business languages and future outlook of the fastest developing country in the Middle East: the United Arab Emirates (UAE). With Abu Dhabi, the capital emirate, and the fascinating and beautiful Dubai, it’s no wonder why this country is attracting so many people for business and tourism. 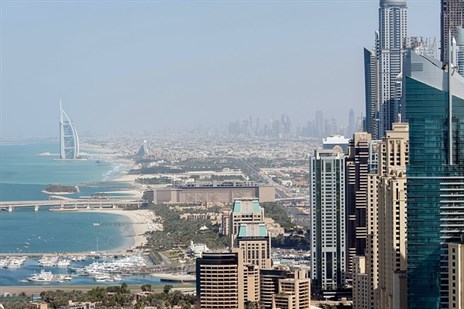 The UAE has an open economy with a high per capita income and a large annual trade surplus.

60% of the country’s GDP comes from Abu Dhabi, primarily from hydrocarbon production. Dubai provides 25% of GDP and acts as the commercial platform due to its well-developed port and airport infrastructure.

The economy of the UAE is the second largest in the Arab world, after Saudi Arabia. A strong banking sector and tourism profits have helped offset the impacts of falling oil prices.

The UAE is rich in oil and it represents approximately 30% of GDP. However, because of dropping oil prices, diversification efforts, especially in Dubai, have been put in place to combat the decline in oil revenues. Tourism is one of the main and most important industries in Dubai and the other emirates. Tourism, international finance, construction, manufacturing, aerospace defense and renewable energy are some of the most significant areas of growth in the UAE.

The UAE is tax-free country, but there are some circumstances in which you will be required to pay taxation in some form.

The political environment is very stable in the UAE, despite the turmoil in the surrounding regions. The UAE is a federation of seven constituent monarchies: Abu Dhabi, Ajman, Dubai, Fujairah, Ras al-Khaimah, Sharjah and Umm al-Quwain. Each emirate is governed by its own ruler and has its own administration. The ruler of Abu Dhabi, Sheikh Khalifa bin Zayed Al Nahayan, was elected President of the UAE in 2004. The ruler of Dubai, Sheikh Mohammed bin Rashid Al Maktoum, is the Vice President and Prime Minister.

The judicial system is based on the civil law system and Sharia Law (Islamic Law).

Arabic is the national language of the UAE. The Gulf dialect is spoken, which is also referred to as “Khaleeji”. English is the main business language and a majority of the local population can speak and understand English. However, knowing Arabic is an advantage for anyone traveling to or doing business in the UAE.

Many other languages like Russian, Chinese, Urdu, Hindi and Tagalog are spoken among the expat community.

The UAE has many opportunities for start-ups, small and medium enterprises and large corporations. The UAE Embassy’s website offers a detailed explanation for how to establish a business and provides links to each of the emirate’s Chambers of Commerce.

The country’s free trade zones, which offer 100% foreign ownership and zero taxes, help to attract foreign investors. World Expo 2020, which will be held in Dubai, is expected to provide a major boost to the country’s economy.