There are six Arab countries that make up the GCC, these countries are: Bahrain, Kuwait, Oman, Qatar, The Kingdom of Saudi Arabia (KSA) and the United Arab Emirates (UAE). These countries recognize the opportunities to generate economic growth and development by capturing their share of the travel and tourism industry and have adjusted their visa laws in hopes of making it easier for tourists to visit and stay in their countries. 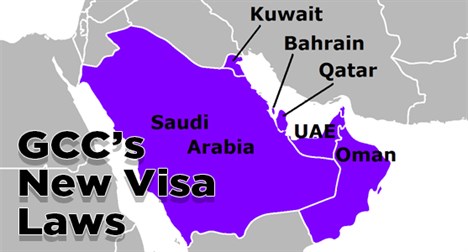 Some of these new visa law changes include:

Under Bahrain’s three month multiple re-entry visa, the maximum stay per visit has been increased from two weeks to a month.

Visitors from Canada, Ireland, the U.K., and the U.S. who receive a five year multiple entry visa are now able to stay in Bahrain for up to 90 days, instead of the previous 30 day limit.

As part of Saudi Arabia’s Vision 2030, KSA plans to begin issuing a number of tourist visas per year. The country did not issue travel visas prior to this plan.

Kuwait has a minimum monthly salary requirement for any expatriate who wants to bring their spouse or children to visit. This has recently been increased from $492 to $650. The minimum for bringing other family members has been raised to $984 and the requirement for foreigners to sponsor family members rose from $820 to $1,476.

Oman’s rules for obtaining multiple entry visas for certain countries has eased up. Travelers from 38 countries can now stay for three months, rather than three weeks.

Since November 2016, Qatar has offered free transit visas for Qatar Airways passengers who have a minimum layover of five hours in Doha. This visa allows travelers of all nationalities to enter Qatar for up to 96 hours. Passengers must apply for these entry visas at least seven days prior to departure.

Dubai has seen a 60% and 84% increase in visitors from China and Russian, respectively. In order to capitalize on this, Chinese travelers have been able to enter Dubai without the cost and time of obtaining a visa since November 2016. Dubai extended this same privilege to Russian nationals in February 2017.

To read more, please see:
All you need to know about GCC’s new visa laws.