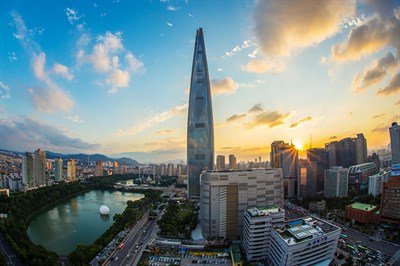 Hangul is the name of the Korean alphabet. Although the spelling, alphabet and vocabulary differ slightly between the two countries, Korean is the official language of both South Korea and North Korea. Linguists believe the Korean language is a member of the Altaic family of languages, which originated in northern Asia.

There are five major dialects in South Korea and one in North Korea. Despite differences in the dialects, speakers from different areas can understand each other.

The Korean alphabet is easy to learn and Korea enjoys one of the highest literacy rates in the world.

Despite the political unrest that resulted in the division of the region, these two countries still share the same culture and traditional values. Korea is divided by boundaries, but still united by culture.

Korea is greatly influenced by the Chinese and Japanese cultures. This influence can be seen by Confucianism, which established many traditions that can be seen in modern Korea today. These traditions include the ethical code of conduct in social life and showing respect to the elders and family.

Koreans also believe in sincerity and loyalty and follow certain codes of conduct while meeting, eating, praying and even celebrating. At times when many other cultures would shake hands, Koreans bow. They bow as a sign of gratitude and respect to the person they are meeting.

Family is the most important part of Korean society and the father is the leader of the family. They also believe in a hierarchical structure and children help their parents and must obey them and show respect to the elders. As Confucius teachings have a deep influence on Koreans lives, they believe in duty, loyalty, honor and sincerity. That’s why children live with their parents after they became adults as they believe it is their duty to take care of their parents.

Confucianism, Buddhism and Christianity are the main religions. Buddhism is the religion in Korea with the most followers and its teachings have a great impact on Korean lifestyle, culture and art. Yungdrung is a main symbol of Korean Buddhism and can be found in all temples and religious places in Korea.

The division of Korea has also caused a divergence in religious life in the two countries due to the different political structures. South Korea has been characterized by a rise of Christianity and Buddhism, while North Korea is considered a secular state.

Festivals have great importance in Korean life. Korean festivals are full of life, colors and joy and they are celebrated throughout the year. Most celebrations and festivals are related to harvest and family.

The Korean society depends on farming so many of their celebrations focus on events to pray for a good harvest. These events have gradually turned into popular celebrations and festivals held regularly in Korea, like the Hanshi (Cold Food Festival) celebration, which marks the beginning of the farming season. Hanshi is celebrated 105 days after Dongji (Winter Solstice).

Korean cuisine is largely based on rice, noodles, vegetables and meats. Some of the famous Korean dishes include bibimbap, bulgogi and dakgalbi. The Korean culture is based on politeness and respect and this is clearly evident in Korean table manners.

Here are some Korean manners for sharing meals with others: