The first microcomputers supported ASCII. Occasionally some letters with accents and symbols and occasionally characters in Russian or Armenian alphabets were included. However, the Arabic alphabet is a little more complicated, it is written from right to left, utilizes different characters, and requires many diacritics to be understood.

What Were the First Computers To Support Arabic? 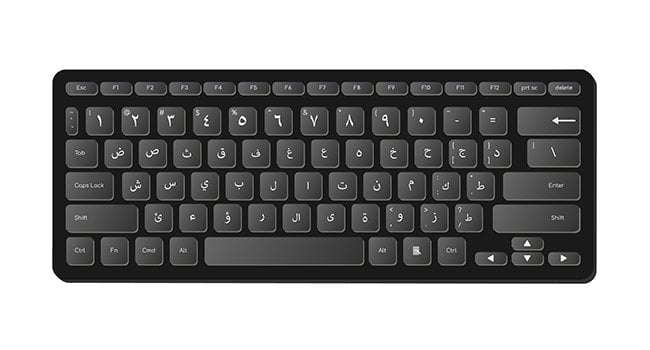 In the late 70s, a team at Xerox began work on a vision: “office of the future”. Most of the technology we use today (windows, the mouse, clickable elements, icons, etc.) had their origin from the Xerox Star 8010.

This system had interesting multilingual capabilities. Unlike any other systems that used 8-bit character encoding, the Star 8010 used 16-bit codes to allow a wider range of characters, input systems, as well as fonts, which had to be designed to support other writing systems like Arabic. It was not easy and intelligent rendering algorithms had to be written to work with Arabic characters.

The Apple II supported rudimentary Arabic versions and has specialized chips inside to produce and understand the Arabic characters.

The Sinclair ZX Spectrum had a rare Arabic version with a switch at the front, to select between the original and the Arabic ROM.

The Arabic ROM includes support for right-to-left writing, and diacritics.

MSX systems was popular in Japan, South Korea, Argentina, and Brazil. It was also popular in the Gulf region where Arabic characters are used. Classrooms with Yamaha MSX computers were common for teaching informatics in some Arab countries.

What About Operating Systems?

In 1988, Microsoft introduced MS-DOS 3.3 with support for the Arabic language. The programs running in this version of DOS worked normally like any other version, although it consumed a more memory than the English version.

The operating system had an Arabic interface and allowed the user to map shortcut keys to switch between English and Arabic. In theory, any well-built program could run in bilingual mode, allowing right-to-left typing, with the character formation required by the Arabic language.

Microsoft gradually incorporated Unicode support in Windows, beginning with Windows NT and Windows 95, influencing the “Arabization” of software products. Microsoft also added support for Unicode to some of their productivity applications, for example Office 97.

Arabic is fully supported on macOS now, although it was not always the case. Apple added support for basic Arabic in System 4.1 and started selling the “Arabic and Persian Language Kit” commercially in 1993. This kit allowed the user to switch between the computer’s main language and Arabic or Persian languages.

It also allows the user enter, edit, or print any Arabic or Persian text and multilingual content with other languages in the same document, or even in the same sentence.

The introduction of Mac OS X 10 did not originally include support for Arabic as Mac OS 9.

In most operating systems and applications, Arabic is fully supported. Arabic is the official language in 26 countries, with around 300 million native speakers worldwide, making it the fifth most spoken language in the world.

Over the years, technology and operating systems have developed, as seen above.  Now, in most operating systems and applications, Arabic is fully supported. Arabic is the official language in 26 countries, with around 300 million native speakers worldwide, making it the fifth most spoken language worldwide. Your translation provider must have the tools and capabilities to work with languages such as Arabic and Russian.