The “&” or ampersand (in English) is certainly one of the most attractive glyphs in the Latin writing system. Originally conceived for economic purposes – the economy of time, economy of space, economy of energies—, with time, the ampersand acquired some elegance and became gifted. For example, an & can promote mere associations to a brand status just by showing up. “Dolce and Gabbana”, “The Velvet Underground and Nico”… sound the same, but look downgraded if not used. 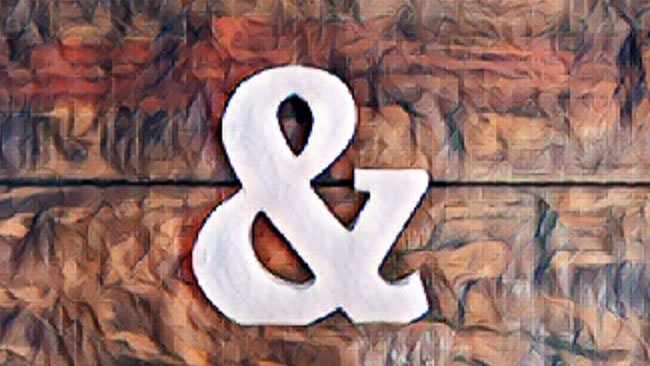 For some reason, this curvy and august character tempts us to exploit its possibilities each time a sentence meets an and, but at the same time, its usage seems limited to rare and privileged occasions—which perhaps, makes it more appealing.

So, what is this symbol? What does it mean? Where did it come from and what is its role in modern writing?

What It Is, What It Means

Better known as the “and” sign, the character & (the ampersand) is a logogram1 used to substitute the conjunction and. Behind its multiple shape variations is the merging of the letters e and t, since & is, precisely, a ligature2 for et—the Latin word for and.

Although the exact moment of the birth of the ampersand remains unknown, evidence of its usage dates back to the Roman civilization. The oldest known et ligature appears as graffiti on a wall from the remains of Pompeii; buried under the ashes of the Mount Vesuvius volcanic eruption in the year 79 AD.

The ampersand managed to reach different languages as the Roman Empire spread.

Centuries later, because of its space-saving quality, scribes first, then typesetters, made extensive use of this ligature in running text—contrary to how it is used in modern writing. In this way, the & was used as a replacement for and whenever a line got too crowded.

It is also worth mentioning the parallel existence of a Tironian et (⁊), designed around the year 100 BC by Marcus Tullius Tiro (Cicero’s secretary) as part of his shorthand system3, known as Tironian notes.

…derived neither from the original Roman letters E and T, nor from their minuscule forms —e and t— but from a scribal abbreviation used in the Tironian notation system. […] The forms of the Tironian notes had almost nothing to do with the Roman alphabet but consisted of unmodulated strokes that carefully differentiated between oblique, vertical and horizontal4.

The Tironian et faded after the 1st century but had quite a comeback during the Gothic period. Yet, this script never shared a single piece of writing with the ampersand. 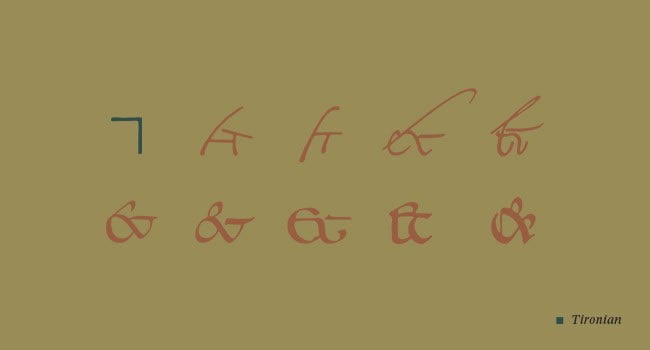 In the present day, the digital advantages of the OpenType expanded character sets allow flexibility, variety, and reminiscence in typography. A font family, for example, Adobe Garamond Premier Pro has ten different ampersands distributed among its Roman and italic versions, while Poetica (by Robert Slimbach) offers a total of 62 variations.

Despite of many writing variations, we usually distinguish two main streams or versions. Firstly, a roman glyph, which follows the Carolingian stroke, which we know and use the most. On the other hand, an italic variable that emulates later cursive et ligatures from the Renaissance resembles more the word itself. Even though styles and variations are frequent, it is by no means a rule in modern typography design. 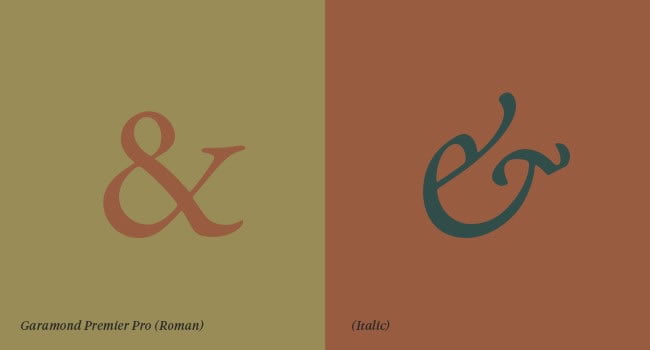 About Its Contemporary Naming

An explanation to its English designation, ampersand, can be related to & being taught alongside the twenty-six letters of the English alphabet until the nineteenth century.

As explained in the Merriam-Webster dictionary:

Starting in the late Middle Ages, single letters that also functioned as words—think I and A—were referred to as letters with the aid of the phrase per se, to clarify that it was the letter being referred to, and not the word. […] When the 27th quasi-letter & was referred to it was called & per se, and, meaning “& by itself (is the word) and.” That read as “and per se and”5.

Eventually, English speakers summarized this “and per se, and” expression into “ampersand”.

The French, on the other hand, went straight to the definition. The word for & is esperluette. This derives from es-per-lou-et, which is the Occitan equivalent for the French C’est pour le « et »: “it is for the and”. Crystal clear.

In Spanish, we simply call it et, honoring its Latin roots.

When and When Not to Use It

In Spanish writing, its use faces a functional dilemma, as the word for and is y, and it is simpler to draw than the ampersand itself. In which case, choosing to replace the word y with the ligature & will be a matter of aesthetics (and perhaps snobbery, too) rather than practicality.

Regardless of the language and despite its former purposes, using & as a replacement for the word and in running text is perceived as a grammar mistake and should be avoided, with some exceptions.

Most common usage of the ampersand:

In commercial-related matters such as business partnerships and, branding and logo design (Tiffany & Co., Johnson & Johnson).

In abbreviations that include the word and (B&B for bed and breakfast, R&B for rhythm and blues).

In academic writing, formal style guides like APA encourage its use in the citation when the source has more than one author.

The Latin expression et cetera (meaning and so forth)—frequently identified with etc.—can also be written &c.

1 In a written language, a logogram is a character that represents a word or morpheme. All ten digits of the Arabic numeral system are logograms: 4 designates four. Moreover, it can be found in Chinese characters, Egyptian hieroglyphs, and even cuneiform scripts, dating back in the Bronze Age. You might be already familiar with logograms such as % (meaning percent), £ (meaning pound), or @ (meaning at).

3 This and future shorthand systems, were created with the intention of speeding up the writing process.