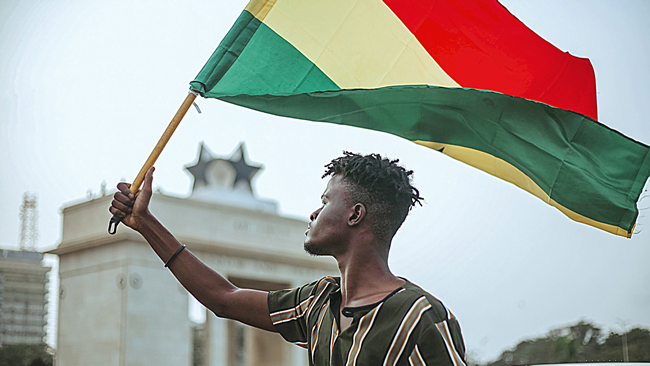 The Republic of Ghana is a multilingual country situated in West Africa on the coast of the Guinea Gulf. Ghana is bordered by Burkina Faso on the north, Togo on the east, the Atlantic Ocean on the south, and Cote d’Ivoire on the west. With its capital city in Accra, which serves as the commercial and educational center of the country, Ghana is home to a diverse population of over 30 million people. The major ethnic groups in Ghana are the Akans with a population of 47.5%, Mole-Dagbon – 16.6%, Ewe – 13.9%, Ga-Dangme – 7.4%, Gurma 5.7%, Guan 3.7%, Grusi 3.5%, Mande-Busanga – 1.1%, Kusaasi, Bikpaaam, and other ethnic groups which constitute the remaining 1.4%.

Besides being a country with varied ethnic nationalities, the people of Ghana are a diverse group of religions and beliefs. Christians make up the bulk of Ghana’s population with 71%, Muslims with 18 %, 5% indigenous traditional worshipers, and other unspecified religions accounting for 6%.  A common identity of the Ghanaians is their national flag which instills a sense of unity among its citizens. The color of the Ghanaian flag is a symbol of what its citizens hold dear to their hearts. The red color on the Ghanaian flag is a symbol of the sacrifices of those who died in the quest for the country’s independence, the gold is a symbol of mineral wealth, the green a symbol of forests and natural wealth, and the black star at the center is known as the ‘lodestar of African freedom’ derived from the flag of the black star line. The design of their flag is an example of the relationship between cultures and colors.

National and Local Languages of Ghana

Despite being a multilingual country, with an estimate of over 50 ethnic languages spoken by people of diverse ethnic groups, the official language of Ghana is English.  English is widely spoken by all and used for legal, administrative, documentation, and all official processes. In informal settings and gatherings, a different variation of English known as pidgin English is mostly used for communication. Pidgin English is common around west African countries and can be described as a second, generally accepted language of communication after English, although not official.

While English serves as the national language, the Twi dialects Asante, Akwapin, and Fante are the major local languages of Ghana used in publication and communication. Other Ghanaian languages with written resources include Ga, Kasena, Nzema, Ewe, Gonja, Dagbene, Dagaare, and Wali.

Other immigrant languages such as French, Hausa, and Arabic are also spoken in the country. In the northern part, which is predominantly occupied by the Zongos, Hausa and Arabic are widely spoken and are being taught in Islamic schools across Ghana mostly for religious purposes. French is also spoken due to the presence of surrounding francophone countries. Presently French is being taught in junior and senior high schools in Ghana and was about to be made an official Ghanaian language in the year 2019 since Ghana is surrounded by francophone countries.

Ghanaians communicate in their indigenous languages when interacting with someone from the same ethnic group, because to them, language is an identity to be proud of. It is important to have a grasp of the country’s national language; English and a bit of pidgin, especially for interaction with the locals as this allows for better communication. These are quite interesting points to note, if one is planning a business venture or service in Ghana as Ghanaian interpretation services will be required. Good knowledge of the Twi language will also come in handy for the localization of products and services as the majority of the Ghanaian population speaks Twi.

Ghana’s culture differs from one ethnic group to another, but the values of a Ghanaian are the same across the country. This is reflected in their family life and social interactions. Common values you can find associated with Ghanaians are hospitability, kind-heartedness, and respect for elders. When it comes to tribal matters, decisions are made by leaders and community chiefs. In Ghana, an individual’s worth can be measured using his level of education and membership in professional and ethnic associations.

As with many countries of the world, Ghanaians are cheerful people who love to celebrate major events and festivals all year round. Seasonal celebrations such as Christmas are a moment of bonding as it brings people together, this event is usually celebrated in a grand style and is marked towards the end of the year. Other ceremonies such as a naming ceremony, funeral, puberty initiation, and marriage are major ceremonies marked in Ghana. These ceremonies are celebrated with Ghanaian cuisine of which soup is a major component. The most common are groundnut, light, and palm nut soups. The soups can be eaten with pounded plantain, yam, cassava Banku, boiled yam, rice, or bread as the situation dictates.

Speaking the language of a person creates a special bond between speakers. It is one of the magic of languages, as it allows one to better connect with native speakers of the language.  For a person who is new to the Ghanaian terrain, the following Ghanaian language translations will come in handy.