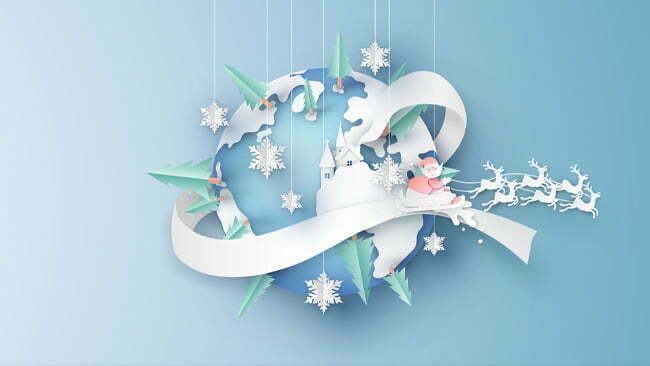 Christmas, December 25th, is a Christian holiday celebrating the birth of Jesus Christ, a spiritual leader whose teachings form the basis of the Christian religion. Christmas traditions range from decorating trees, exchanging gifts, singing Christmas carols, religious ceremonies, imbibing in food and drink to kissing under the mistletoe. Non-Christians around the world celebrate this day as a secular holiday, turning the month of December into a cultural and commercial marvel.

The origins of Christmas predate the arrival of Jesus.  Early Europeans celebrated the winter solstice as a time of renewal as the darkest days of winter were behind them and longer days with more hours of sunlight were ahead of them. In the 4th century church officials decided to begin celebrating the birth of Christ. There is no mention of the date of Jesus’ birth in the Bible, but Pope Julius I chose December 25th as the date of Christ’s birthday. It is widely believed that the date was chosen as a way to incorporate the traditions of the pagan Saturnalia festival. Many modern day Christmas traditions are rooted in the Saturnalia festival.

The story of Christ’s birth takes place in a stable in Bethlehem. Mary and Joseph were traveling and stopped at an inn to rest. The innkeeper didn’t have any beds available and instead offered a manger in the stable, surrounded by livestock, where Mary gave birth to Jesus. Shepherds from the surrounding fields were told of Jesus’s birth by an angel and were the first to see him.

Tradition also states that three wise men followed the Star of Bethlehem, believing it announced the birth of the king of the Jews, to visit the infant Jesus; bringing gifts of gold, frankincense, and myrrh. In many churches, children re-enact the events of the Nativity as part of the Christmas celebrations.

Traditions Around the World

In the United States, Christians and non-Christians alike celebrate the holiday with colorful decorations, decorated Christmas trees,  exchanging presents, and feasts. Christmas Eve is when many people begin the celebrations.

In my family, we celebrate by having a special meal, attending a candle-lit church service, and opening presents on Christmas Eve. Christmas Eve is also when Santa Claus and his reindeer make their journey around the world delivering gifts to children. Children can follow Santa’s travel courtesy of NORAD through a variety of social media platforms or NORAD Tracks Santa.

The origin of Santa Claus, dates back to 280 AD in present day Turkey to St. Nicholas, considered the real Santa Claus. He was a monk known for his selfless acts. It is believed that he gave away all his inherited wealth and traveled the land helping the poor and sick. Eventually, he became known as the protector of children and sailors.

There are myriad of different Christmas traditions around the world. Some are similar and some are vastly different. A Christmas tradition I discovered a few years ago is that of Krampus Night on December 5th. Krampus is Santa’s evil twin whose job is to punish the children on the “naughty list.” This dark and scary tradition originates in the Germanic alpine regions and is widespread throughout Hungary, Bavaria, Slovenia, and is especially popular in Austria.

In the Czech Republic, unmarried  women practice fortune telling to predict their relationship status for the next year. The practice is to stand with your back to the door and toss one shoe over your shoulder. If the shoe lands with the toe facing the door, the woman will be married within the year. If the heel is facing the door, it means another year unmarried.

Norwegian legend states that on Christmas Eve, witches and evil spirits come looking for brooms to ride. To keep them away, all brooms in the house are hidden and men go outside and fire a shotgun to scare the evil spirits away.

To Christians and non-Christians alike  the meaning of this special holiday is one of good will, peace, and joy. All of us at GPI want to wish you and your loved ones a very Merry Christmas and Happy Holidays.