Arabic has long been considered one of the richest and most poetic languages in the world. Where is the balance between maintaining the beauty and tradition of the Arabic language with the need for short, succinct advertising messages? Is the Arabic language being compromised by a new vocabulary being developed under western influences?

GPI’s main Arabic Globalization Specialist and Copywriter, Abduljalil Al-Juboory, shares a unique and totally original perspective on this sometimes contentious issue. Read on, and discover why there is sometimes a lack of agreement amongst experienced Arabic linguists on the best path to take for effective Arabic language marketing copy.

Why is there so much disagreement about Arabic?

While some linguists perceive the Arabic language as a prosaic and crossbred language, others view Arabic as a dynamic, living language passing through a normal stage of development. A few decades ago there was similar controversy and disagreement about French and the trend towards “Franglish”, or a version of modern French peppered with too many English language expressions.

The Arabic language, as used in advertising and marketing today, leads to considerable differences in opinion between advertising professionals, academics who are interested in the purity of the Arabic language and its uses, and even media enthusiasts. Some think that advertising copy should be simple, not restricted and close to modern usage in order to promote products and engage consumers. Others view the Arabic language as underdeveloped and struggling to grow and keep up with other modern languages. Still, many others believe that Arabic should maintain a certain degree of “purity” or tradition in meaning and structure. 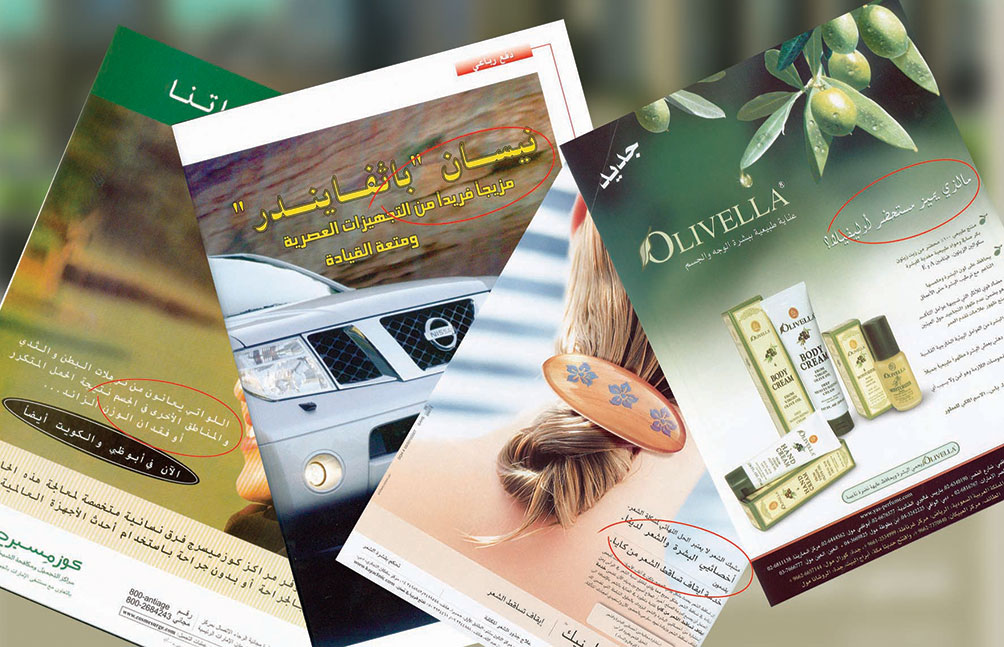 What differentiates advertising content/language from other styles of language is its simple structure, clarity of the message and a goal of using the minimum amount of words to express an idea.

Arabic is a highly expressive language, prone to use more words to express a thought than some other languages. There is the potential to create a diluted message if the text is too short which leads to the misperception that Arabic is “underdeveloped”.

Should there be legislated guidelines for Arabic copywriters and translators in certain markets?

Let’s focus on what has been published in the media on this topic of Arabic language structure and the intentionally or unintentionally distortion of the advertising message. I have recently done some research and have had discussions with experts and language professionals in this field. My goal has been to clarify the widespread misconception by these professionals that the Arabic language is weak.

Many PR specialists in marketing agencies across the UAE say there should be an organization for language experts who review all ads to be published in the region. Such an official organization would give approval for advertisements or return the rejected ones for a “rewrite.” This would apply to advertising content in print, radio or even Arabic television. Most advertising agencies do not have the time or expertise to review ad content for appropriate expression in Arabic. Many experts in this field also feel that there should be certain standards or certification for Arabization, Arabic copywriting and translation jobs at the advertising agencies, similar to many other professions.

Which connects with consumers best? One Arabic language teacher I consulted in Dubai thinks that advertising language depends on the copywriter himself, his knowledge, culture and mastery of the language. “For me, I prefer the classical Arabic to be used in advertising, as it is the mother of all local dialects in our region, and the common denominator that combines them all. Unfortunately, many Arab satellite channels and print media use local dialects in their ads, commercials, and even reports and shows, and this has had a huge effect on the audience,” she said. “When I see and read an ad written in a colloquial dialect, I do not pay attention to it; however, when I find an ad with beautiful classical Arabic language, I perceive the ad as more compelling because the ad itself is elevated by the beauty of the language.”

Other creative professionals in some of Dubai’s biggest advertising agencies see the variety of Arabic dialects as a gift; advertising copywriters and translators can handle these language variations with professionalism and creativity to reach local consumers in a more persuasive manner.

“I believe the advertising language enriches the Arabic language; it is a new addition, similar to a ‘Free Verse Poem‘. Horizons should be wide open for creative talent and there should be no restrictions on those copywriters who are highly skilled and well-versed,” commented one creative director. “Some awards and competitions in advertising copywriting can be created to develop the professionals’ skills. However, selling the product should remain the main objective, and these awards would only be used to motivate professionals and encourage them to become even more effective in using Arabic creatively.”

Other Arabic copywriters and translators at these same agencies believe that the ineffective use of Arabic in advertising stems from a variety of trends with the two biggest being growth and resources. The Arabic advertising quality has been negatively influenced by the economic boom throughout many of the GCC countries over the past 10 years. There has been unprecedented growth in advertising and marketing which has led to a shortage of qualified, creative copywriters and certified translators to meet this demand which in turn forces advertising agencies to hire inexperienced candidates with insufficient qualifications to bridge this gap.

“Taking into consideration the fact that this region became an international hub for distributing many global brands, we will see an increasing need to prepare and develop even more specialized people in creative copywriting and marketing translation to keep pace with this huge boom,” several professionals commented.

The role of education in effective use of Arabic in advertising

They felt that education may have a role in this, as many educational institutions and schools offer limited Arabic Language courses or do not offer them at all. Yet they offer other languages in depth. This results in a generation that has a limited knowledge of its mother tongue and finds it difficult to deal with or even to understand proper Arabic in the workplace. Arabic should be a part of a school’s core curriculum.

Ultimately, the responsibility for weak usage of the Arabic language in advertising goes to those who give the final approval on the content. They often degrade the quality of the Arabic content by injecting unnecessary personal preferences that may reveal their lack of familiarity with the fine nuances of Arabic. Often their stylistic changes reflect their local dialects and may not be appropriate for the larger audience.

Conclusions on the proper use of Arabic in advertising copy

There needs to be a balance between maintaining the strength and eloquence of the Arabic language, and succumbing to modern advertising approaches to quickly engage and persuade consumers to buy new products and services. Ultimately, the main objective is to find away for the target, Arabic-speaking audience to “connect” with the product. The following are some recommendations by media professionals and linguists interviewed for this article:

Other issues with Arabic localization