Many people do not realize but the Arabic writing system is the second most widely used script in the world next to the Latin script.

There are many differences between the Arabic and Hebrew languages including the different appearances in their alphabets, Hebrew letters are written individually while Arabic letters are strung together in cursive and the number of letters in each alphabet, Hebrew has 22 and Arabic has 28.

Both languages though are written from right to left, so translators and desktop publishers need the ability to change paragraph direction which was always a big challenge when it came to localizing file in these languages. 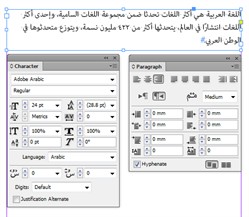 The new InDesign CS6 has  extensive features for right-to-left languages which help to handle the writing system for these languages and the different nature of the fonts used by languages like Arabic and Hebrew. In addition, CS6 allows for the creation of designs with Arabic, Hebrew, or mixed content.

To work with localized Arabic and Hebrew content using InDesign, you need some special features for the layout such as the paragraph direction, story direction and binding direction.

InDesign provides the option to reverse the layout which is one of the best features for desktop publishers who commonly use right-to-left languages. This option allows a complete reverse for the layout including graphics and paragraphs into right-to-left direction layout.

Overall, InDesign CS6 is an impressive upgrade to an already mature program. Several of the new features will make Desktop publishers very happy in the translation industry.

Arabic translation and localization, which includes desktop publishing, requires solid experience with the Arabic language and Arabic-enabled desktop publishing tools to enable delivery of localized Arabic files in best quality. Your language translation services company should have qualified desktop publishers or graphic artists who are proficient in the programs mentioned in this blog. You may find some of our previous blogs on Arabic design and translation issues useful: