In this three-part series we will look at the mobile device market, the current leading operating systems and their multilingual support and configuration requirements, followed by tips on how to use mobile devices during international travel and the best mobile apps when criss-crossing the globe.

So let’s first look at the mobile device market, vendor share and leading operation systems that currently rule the landscape:

According to the International Data Corporation (IDC) worldwide smartphone shipments exceeded the 300 million mark in a single quarter. In Q2 2014 a record 301.3 million shipments were made globally reflecting a 25% market growth compared to the same time the year prior. The tremendous growth can be attributed to ongoing demand for mobile computing and the abundant availability of inexpensive smartphones. 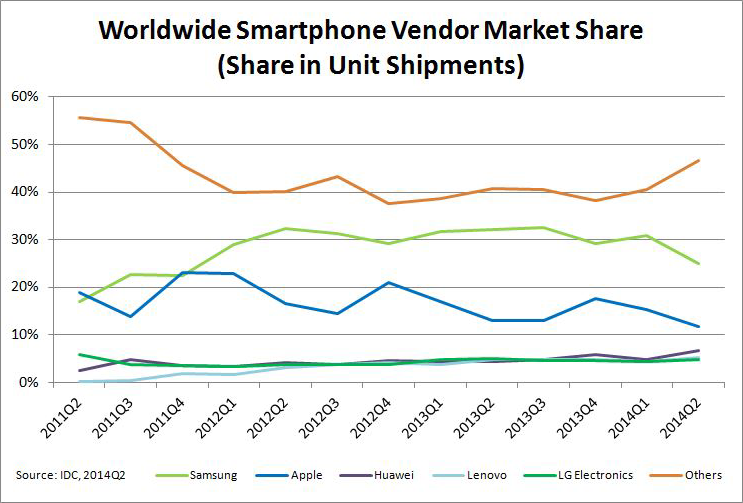 As was to be expected Samsung and Apple are the clear market leaders followed by Huawei, Lenovo and LG. Interestingly enough, all other smartphone makers combined make up for almost 47% of the market. So much for the vendor market share – however, let’s take a closer look at the breakdown when it comes to the actual operating systems.

It may be hard to believe but by looking at the table below it is clear that the two main operating systems, Android and iOS, are dominating the global market accounting for over 96% of all smartphones currently in use worldwide. However, it has to be noted that Android continues with global smartphone market domination as its market share has steadily risen by an average of 10% year after year starting with Q2 2012 to a current market share of almost 85%. iOS market share in contrast has been experiencing minor drops year after year in the same time period mainly due to higher demand of low-cost devices, which Android offers plenty of, while iPhones still cater to the higher paying customer. Windows and Blackberry do still play a role in the market albeit a very minor one compared to the top two. 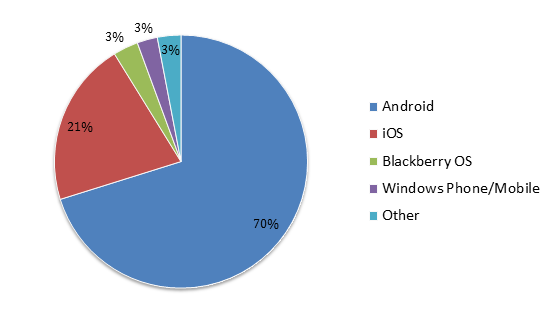 This is indeed a staggering statistic that lends itself to the question that global users must ask themselves daily: If we are basically choosing from a few operating systems, which operating system is better suited for global users since they require additional language support? What are the similarities between and differences amongst them? What kind of language support do they offer? In this first blog in the series we will focus mainly on Android and iOS.

A closer look at the language support offered by Android and iOS:

Android is now also translated into Africaans, Amharic, Hindi, Swahili and Zulu. Hebrew, Arabic and other right-to-left (RTL) languages are now supported on the home screen, settings, and Phone and People apps.

In addition to all the standard language support features, Google added one more recent feature to Google’s Search for Android: multilingual Voice Search. In the past you could use voice search in over 50 languages but had to change your settings. Now all the user has to do is make some tiny one-time adjustments and tweak a few settings by going to Search and Now > Voice > Languages and select the languages you’d like to switch back and forth in. Google will then automatically detect whatever language you are using at that given moment; dictating a letter to a friend in Spanish while searching for an Irish pub nearby in English.

According to Apple, for this feature to work the voice control and setting need to both be for the same language, meaning Voice Control will not understand English if the setting is changed to another language such as French for example.

VoiceOver is supported in the following languages:

To change the language used for VoiceOver, go to Settings > General > International > Language.

In addition to VoiceControl and VoiceOver in multiple languages, iOS for iPhones offers the option to add multilingual dictionaries, multilingual input capabilities, and a great unique feature, Braille tables for multiple languages! Last but not least, another one of Apple’s unique features thanks to the global distribution provided by the App Store is the ability to release any iOS app in over 150 countries with a single click – of course you will have to handle the actual app localization on your own and should therefore make sure to partner with a localization service provider with strong mobile app localization expertise.