Adobe Arabic font is an OpenType font designed by Tim Holloway with help from Fiona Ross and John Hudson in 2004.  It was commissioned by Adobe with production by Tiro Typeworks. Adobe Arabic font won recognition from The Type Directors Club (TDC) and is well known as a good counterpart for Latin serif fonts. 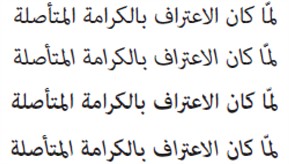 According to an Adobe statement, “The design brief was to create a type family that would meet the needs of modern business communications in all the languages supported by the Unicode Arabic character set: not just various forms of Arabic, but also Persian, Urdu, and many other central and south Asian languages written in the Arabic script and using distinctive letterforms and diacritics.”

Adobe Arabic font was created to provide a wider range of serif typographic options for designers not only for Arabic but also for other languages in the Middle East and North Africa (MENA).  Adobe Arabic comes bundled with the ME versions of Adobe products. It was inspired by the Latin font Minion Pro and uses the same character set for the Latin characters. Although Arabic letters don’t have true serifs, you can recognize the serifs in this font easily. The font is really simple, modern and easily readable in both print and on screen so it is best suitable for text blocks. In fact, we have many Arabic fonts today that are inspired by Latin fonts, but most of them are suitable only for titles, headings, and slogans. Only a few of them are suitable for paragraphs and text blocks.

Adobe Arabic is one of the rare fonts that has the four styles: Regular, Bold, Italic, and Bold Italic.
The extra stroke and slant for the bold and italic styles are professionally done so that the bold does not appear bigger than the regular style, and the italic is leaned to the left to reflect the reading direction of Arabic.