Adobe is a leading company in the field of design and productivity software. Adobe products such as InDesign, Illustrator and Photoshop support Arabic and all other Right-to-Left (RTL) languages. But products, like Adobe Flash, have the limitation of not supporting Arabic and RTL languages. For example, there are only a few attributes for text formatting. Arabic desktop publishers will use third party tools to place Arabic text inside Adobe Flash as images or outlined text as a work around.

Beginning with Flash Professional CS5, a new text engine called the Text Layout Framework (TLF) was added to Adobe Flash. TLF allowed greater control of text with a variety of text attributes not supported in the classic text field. Supporting RTL languages and bi-directional text was a brilliant and unprecedented step in Adobe Flash with TLF.

Below is a list of the enhancements TLF text provides: 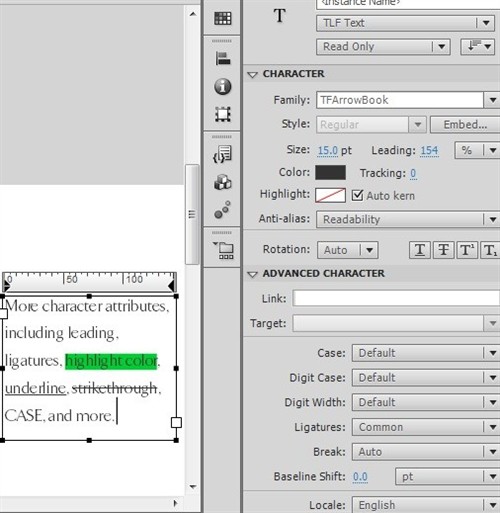 Although TLF text is the default text type in Flash Professional CS5, in Flash Pro CS5.5 and CS6, the default is the classic text, so you have to select the text type (Classic or TLF) from the Properties menu, as shown in the screenshot. 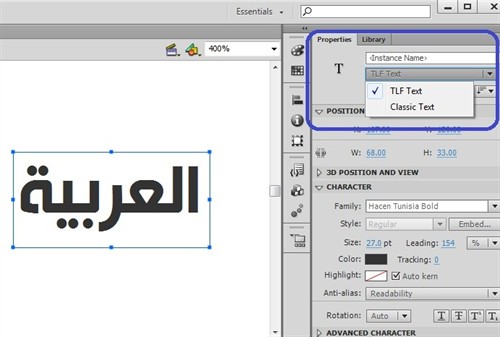 TLF text requires that ActionScript 3.0 and Flash Player 10 or higher are specified in the publish settings of your FLA file. So, if you have a FLA file with ActionScript 2.0 you won’t be able to publish it with TLF text or your scripts will be disabled by enabling only ActionScript 3.0.

You cannot make a layer mask for TLF text, instead you can create it with ActionScript 3.0.

With TLF text, you won’t be able to preview the anti-aliasing effect until you publish the flash file to SWF.

You can create three types of text block with TLF text, depending on how you want the text to behave at runtime:

This means that if you have a Flash file you created with Adobe Flash Pro 5, 5.5, or 6 that contained any Arabic, other RTL language, or bidirectional text, you won’t be able to upgrade to CC or CC 2014. The content will be corrupted because Adobe Flash is no longer supporting Arabic.

While Adobe Flash users are not thrilled with the missing capabilities that were previously provided by TLF, Arabic users like myself would like to see Adobe’s steps forward in supporting the Arabic language with TLF.

I will continue working in Adobe Flash CS6 for Arabic support and when I have to work in Flash files that are created with a more recent version, I will return to use third party tools to put Arabic text inside Flash.