The Persian language, also known as Farsi, belongs to the Iranian branch of the Indo-Iranian languages. It gets its name from Persia, the former name of Iran.

Farsi is spoken by around 130 million people, mainly in Iran, Afghanistan, and Tajikistan where it is an official language. Historically, it was widely spoken in other areas in western, central and south Asia. Today, it is still understood in parts of Armenia, Azerbaijan, India, Iraq, Kazakhstan, Pakistan, Turkmenistan, Turkey, and parts of the U.S. and Europe where large Persian groups emigrated.

Persian was developed in three phases: Old, Middle, and Modern. Old Iranian is represented by Avestan and Old Persian. Old Persian is recorded in the cuneiform inscriptions of the Persian kings of the Achaemenid dynasty (circa 550-330 BC), and it has close affinity with Sanskrit, and, like Greek, and Latin, are highly inflected languages.

Middle Iranian is represented by the closely related Parthian language and several Central Asian tongues. Middle Persian has a simpler grammar than Old Persian and was usually written in an ambiguous script with multivalent letters, adopted from Aramaic.

Modern Persian had considerable Parthian and Middle Persian elements, with influences from other Iranian languages. It had developed by the 9th century, and was written in Perso-Arabic script. Its grammar is simpler than that of Middle Persian. 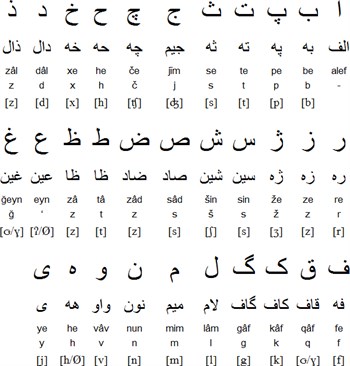 Perso-Arabic script is based on the Arabic script, although it has four letters more than Arabic: پ [p], چ [t͡ʃ], ژ [ʒ], and گ [ɡ].

It only includes letters for consonants, where vowels, are written with diacritics and/or combinations of consonant letters.

Persian is a right to left language; although numerals are written from left to right.

In order to represent non-Arabic sounds, new letters were created by adding dots, lines, and other shapes to existing letters.

The script is written in cursive, so the majority of letters in a word are connected to each other. Therefore, the appearance of a letter changes depending on its position.

Farsi numerals, like Arabic, are the Arabic-Indic numerals, although the symbols for 4, 5 and 6 are different from the standard numerals used for Arabic. It is also worth mentioning that the numbers are pronounced differently in Arabic and Farsi.