The winners of the ninth annual Best Translated Book Awards (BTBA) were announced on May 4th at The Folly in New York City and simultaneously on themillions.com.

Yuri Herrera’s Signs Preceding the End of the World (Mexico, And Other Stories), translated from Spanish by Lisa Dillman, won for fiction. 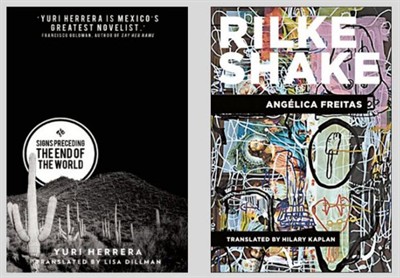 The four winning authors and translators each received a $5,000 cash prize funded by the Amazon Literary Partnership.

BTBA, which received 500 fiction entries this year, was founded by Chad Post who created Three Percent, a resource for international literature. Three Percent is based at the University of Rochester and takes its name from the estimated percentage of books published annually in the U.S. that are works in translation.

In a post-awards interview for Rochester University, Post said Rilke Shake earned praise for its playfulness and for its great shifts from irreverence to heartbreak and back again. He described Signs Preceding the End of the World as “a great book that’s also incredibly timely.”

Post said to win the award depends as much on translating the right book at the right time as the quality of the original work and the quality of the translation. The Best Translated Book Awards helps promote international literature to a global audience and offers readers the opportunity to encounter great books from different cultures and literary traditions.

To read more, please see: And the Winners of the Best Translated Book Awards Are…