As mentioned in the previous blog, Localization challenges in translating eLearning content which focused on Asynchronous eLearning, characteristics of the courses inhibited the achievement of equitable learning outcomes. “Equitable learning” means that all learners, despite their cultural differences, use the same amount of time and effort to generate the same knowledge and skills. From the perspective of the targeted learners, such elearning courses may be ineffective, irrelevant, or even erroneous. From the organizational perspective, such courses waste resources (time, financial, and human) and potentially generate risk – with an untrained or undertrained workforce.

Now, we’ll review the localization challenges in the asynchronous environment of self-paced eLearning.  What distinguishes the translation and localization needs for self-paced elearning from those of the asynchronous university models?  The fact that there is no instructor, ever!  Instead, course designers must create self-paced courses as if there were an instructor, which place additional demands on their cultural knowledge.  Why?  Because you need to know how the targeted learners expect to be taught, and to learn.  Be very careful about making assumptions here: Most educational systems are unlike the American model.  By recognizing these differences, course designers and developers can identify what content to present and how; which instructional design approaches to use, including any assessments of learning; and, not surprisingly, which media to use.  Let’s look at examples of how content, methodology, and media should be different, using an ethics course from a Business Code of Conduct curriculum and one on Disability Awareness. 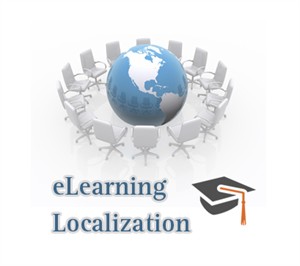 In the ethics course, an American multinational corporation wants to promote its code of conduct to its 88 global offices.  One course in the curriculum covers the company’s policies and expectations of its employees with respect to their relationships with vendors.  In particular, the course stresses that employees should never demonstrate any favoritism to vendors, fraternize with them, accept gifts, or accept bribes of any kind.  However, employees in several emerging economies will be taking the course as well.  In these countries, the norm has been to befriend business colleagues and build relationships – whether through favors, gifts, nepotism, whatever – to facilitate the conduct of business, especially in bureaucratic countries.  In addition, it’s often common business practice in these countries to accept or offer bribes and gifts in order to conduct business.

Another American company, a global tech support center, is creating a course on disabilities awareness for its customer support staff.  The company wants staff to treat customers with disabilities according to U.S. values and law.  However, many staff members work in countries which to not have the same laws, policies, and accommodations as those in the U.S.  For example, some of the assistive technologies available in the U.S. are non-existent in many countries.  You may check our Website Globalization and E-Business Series for more information about cultural correctness and values in different countries and languages.

Thus, how does course localization team modify the content to address these cultural differences?  The course content needs to be written – and presented – in a manner differently than is used for the American audience in order to effectively address these critical concepts in the context of the targeted audiences experiences and values.

We’ll talk more about how content is written in another posting, but here, terminology distinctions warrant attention.  In the American version of the course, the authors stressed that support staff address customers as people with disabilities, instead of the disabled, the handicapped, etc., in an attempt to focus on people instead of their disabilities – an American cultural value.  However, from the perspective of translation, this distinction presents a challenge.  For example, in German, the word behinderung tends to represent disability, handicapped, etc.  The same situation exists in French, Dutch, etc.  Thus, courses need to be written in ways that contextualize terminology nuances.

In the ethics course, designers introduced the concept of unacceptable vendor relationships using a case study in the first screen of the course.  They challenged learners to review an ethical situation and decide on the most appropriate course of action.  Learners in risk adverse cultures (high uncertainty avoidance) protested that the course was testing them without first providing content that held ‘the answers.’  The goal of the course authors was to pique the interest of learners; however, for some, they felt they were being evaluated unfairly.  How do course developers accommodate their cultural preference for a more didactic approach to learning?

In the disabilities awareness course, the authors required that learners pass a final assessment with a score of 80% or greater.  In the pilot study, learners in risk adverse cultures protested that the assessment was unfair because it did not cover scenarios explicitly included in the course content.  In the American education system, we expect learners to extrapolate information to new situations; however, in many countries, rote learning is the norm.  How can course developers accommodate their cultural expectation that all ‘answers’ will be offered in the course content? 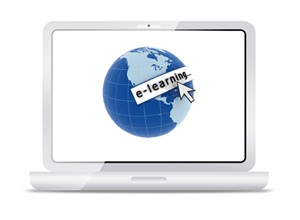 In the ethics course, the images of office environments showed a young, female CEO.  In addition, there were several mini-videos in the course.  Several Eastern European companies rejected the course, stating to sales representatives that the course did not accurately reflect their environment.  For example, in their countries, less than 1% of executives were female and those that were, tended to be older.  How do course developers contextualize these differences?

In the disabilities awareness course, authors talked about the assistive technologies available to people with disabilities, but did not show any images of these technologies.  In many countries, such technologies just do not exist.  In addition, they wanted call center staff to be able to recognize when a caller was using, for example, voice recognition software.  However, they did not provide any audio components so that learners could recognize the sounds of these technologies.  Course designers need contextualized media, and in many instances, media to support unfamiliar concepts.
For more information check Audio/Video Translation page.

Localization of Rapid eLearning Courses versus Customized Ones

We also mentioned in the previous blog that there are two basic types of eLearning courses: those created with authorware (course design software) and those custom-created by a team of technologists and designers. For the former, companies need to educate their staff on the importance of cultural differences and train them to incorporate appropriate content, methodology, and media into their course design.  In the latter, the course stakeholders, such as project managers, need to coordinate the work of creative staff (video production, graphic designers, scriptwriters, etc.) to create at minimum ‘internationalized‘ versions of elearning courses – those that are void of obvious Americanisms.  In addition, the project managers need to ensure that development teams are using technologies that are ‘localization ready.’

Remember, eLearning localization goes beyond technology and images. We look at each eLearning course from one of the most important perspectives: from that of the targeted learners.   Our goal is to ensure that your courses deliver equitable learning outcomes for all users, no matter what their culture or language.  By conducting a cultural analysis, we can identify issues with your course’s content (language, relevance, etc.), instructional approach (methodologies, learning styles, etc.), and media (images, icons, voice, etc.) before you spend money on technical localization and translation.